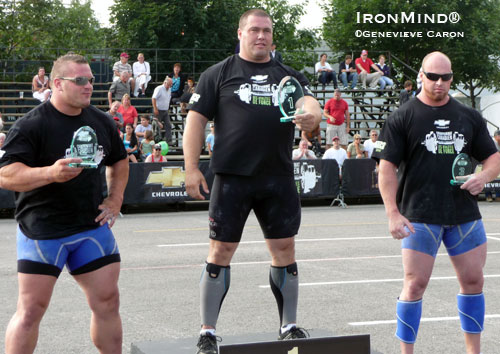 
Yesterday, Canada’s Strongest Man was marked by close battles, but at each stage, Christian Savoie pushed onward.  As a result, he came into today with a solid lead - surprising a lot of people as he proved himself to be the man to beat - and today saw him continue on his path, claiming the big title and the big invitation.

Christian Savoie left no doubt that he was focused, finishing strongly on the final event, a medley, once again a battle between himself, Jean-Francois Caron and Louis-Philippe Jean.

Here are the final points and places for the top three:

All of these points are unofficial, although they are believed to be accurate.  IronMind® would like to thank everyone who contributed to our coverage of the 2009 Canada’s Strongest Man contest, especially Ms. Geneviève Caron, Communications Consultant for Montmagny, Quebec.