Doha - Not just for weightlifting, but for all sports in the 2006 Asian Games, Chan Yanqing (China) just broke the first world record, and before she was done, she added four more. 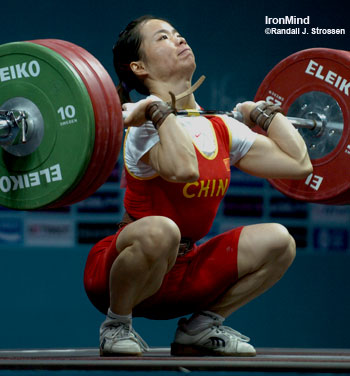 Needless to say, the women's 58-kg category at the Asian Games today was all Chen Yanqing. When everyone else was done snatching, she opened with a good 103, followed by another nice lift with 108, and she ended her run with 111 for a new world record. If that seemed like a good series of lifts, consider her clean and jerks, where, once again, she started after the rest of the class was done. Opening with a good lift at 131, she nailed the gold medal and broke the senior world as well as the Asian record in the total, pushing it to 242 kg. Taking 137 kg on her second attempt, Chen once again made a good lift and reset the records she had just broken. The lift looked quite easy although she seemed to be shaking a little as she set up for the jerk. And if it was easy, with five good lifts so far, why not add one more? So for her third attempt, Chen knocked 140 kg out of the park, which broke the senior and Asian world records in both the jerk and the total.