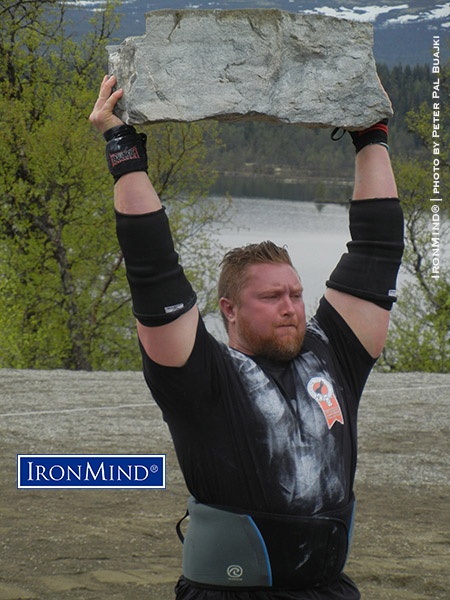 Casey Garrison (USA) on the stone press at the IHGF Stones of Strength competition in Vinstra, Norway. IronMind® | Photo by Peter Pal Buajk

The first event, the 88-lb stone throw, was done freestyle with both hands from behind a trig with an approach of 3 m. Garrison owned this event from the first round, with a best of 17’. In a tight contest for second, Kelly prevailed at 16’ 2” over Kobylarz at 15’ 9”.

In the duck walk, athletes carried the first stone, weighing 160 kg, by a handle a distance of 30 m then a heavier stone weighing 250 kg back to the start, with 75 sec. to complete the course.  This grueling event left the athletes exhausted in the short time. Garrison took off like a sprinter with the first stone and gave his all with the second—and was the only athlete to finish the course; his time was 62.02 sec. Second was Kelly, who went 12.50 m with the heavier stone, and third, Ogmundsson, who did 11 m, also with the heavier stone.

In the 220-lb. stone press, athletes had 75 sec. to complete as many reps as possible from the ground to overhead. Kelly managed a total of 8 reps for the win; second place was three-way tie between Ogmundsson, Sztajdocher, and Kiss with 7 reps; in fifth place was Garrison with 6 reps.

Garrison now had a 1 point lead over Kelly going into the Husafell stone carry, a massive 400-lb carried for distance. Garrison made it look like a walk in the park, triumphing with 369’.  Second was Ogmundsson at 278’ 8” and third Burke at 277’ 2”.

The second leg in the IHGF Stones of Strength World Series will take place in the town of Celldomolk, Hungary on Sunday, 28 June. Prior to that, on 26–27 June, the IHGF World Strength Games Championships will be staged in the town of Velence, Hungary.