Mario Martinez brought home a silver medal in weightlifting from the 1984 Olympics, the last member of a USA men's Olympic weightlifting team to hit the podium, so when someone extremely knowledgeable talks about "the next Mario," it's time to listen up. 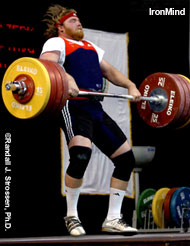 So when three-time USA Olympic weightlifting coach Jim Schmitz said of Casey Burgener, "He might be the next Mario Martinez," that's a big statement.

Casey Burgener, the top US super heavyweight, just keeps lifting bigger and bigger weights: In recent big meets, for example, he PR'd at the 2005 USAW National Championships, followed by more PRs at the 2005 World Championships, and recently he had another PR-day at the 2006 Pan Ams. As part of his steady progress, Casey Burgener is getting noticed along the way by people who know a thing or two about weightlifting.

"He's a great kid," said Schmitz. "I'm impressed with him. He's quiet, respectful and goes out and lifts big weights. He's not as strong as Mario [yet], but he's a weightlifter."

Incidentally, besides all he is putting forth to create his success, Casey has the right gene pool and environment: His strongly supportive family includes his dad, Mike, who played football at Notre Dame, pressed 400 pounds as a 198-er, is a retired USMC officer, teaches at Rancho Buena Vista High School, and besides coaching at both a local and international level, is active in USA Weightlifting and CrossFit.