“Carl-August Mertz came to us to bend the famous Red Nail on 3rd of November [and] in less than 60 seconds he succeeded in bending all three nails that we had received from IronMind,” Dr. Hermann Korte reported to IronMind. 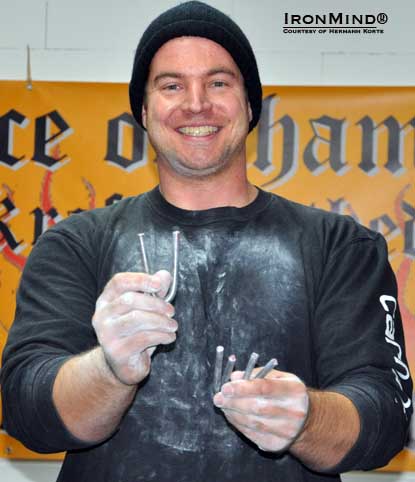 Bouldering and rock climbing are Carl-August Mertz’s main sports, and he found that grip training and bending were natural complements.  Proving his strength, Carl-August Mertz blew through the IronMind Red Nail—leading to his certification.  IronMind® | Photo courtesy of Dr. Hermann Korte/Choice of Champions gym.


Asked how he got into bending, Carl-August Mertz, told IronMind, “I searched the Internet for a new gripper, found the Captains of Crush and the German supplier.  They sell the IronMind Bag of Nails, too.

“I did some research, found some YouTube videos, specially from Paul Knight, Tommy Jennings and Justin Straussner and wanted to try this.  First workout I did bend White to Yellow, second workout Blue.  All of them first try.”

Dr. Korte added, “Carl-August teaches chemistry and physical education at a high school.  As a track and field athlete who concentrated on throwing events he found out that strength came easy to him.  At the age of 17 years he already did jump squats with 200 kg.

“Now he concentrates on climbing and bouldering.  He also works on Olympic lifts and his grip.  Becoming a father around Christmas he and his wife Sara are looking forward to a long journey in 2013, when they want to go climbing in North America and Australia,” said Korte.

36 years old, 182 cm tall and weighing 104 kg, Mertz said that his body weight puts him at a disadvantage in climbing, "but for bending stee this doesn't matter," and his success speaks for itself.

Thank you once again to Dr. Hermann Korte and his Choice of Champions gym for serving as IronMind’s official referee, and a hearty congratulations to Carl-August Mertz because it’s official: you have just been certified and your name has been added to the Red Nail Roster.