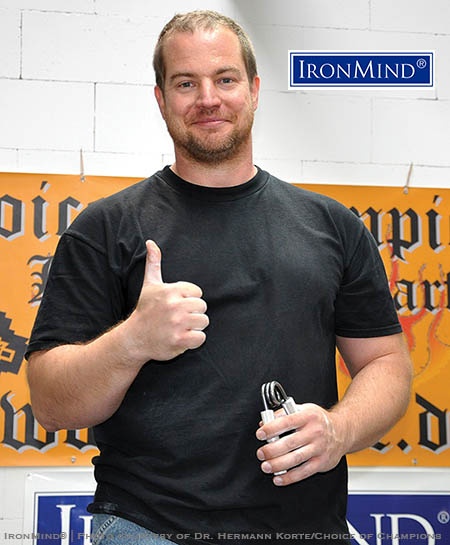 Asked how long he has been training with Captains of Crush grippers, Carl-August Mertz told IronMind, “I bought my first CoC Grippers in January 2012. I broke my plastic-handle gripper and had to replace it, so I searched the internet for something better and found the German IronMind distributor.

“The grippers arrived a few days later and I could close the No. 1 and No. 1.5 first try out of the package, and No. 2 second or third try (still first minute). The No. 2.5 went down after like 2 weeks or so. In the following 5 or 6 weeks I had a gripper session every three days and came close to the No. 3 but couldn't close it. A session was like warming-up on the easy ones and some attempts on the No. 3. Nothing special.

“After that I abandoned the grippers, cause they are too harsh on the skin and this affected my other workouts (bouldering/rock climbing, hang boarding, campus boarding). At the moment I use the CoCs when I am away from home.

“In 2012 IronMind introduced the Zenith grippers and they are really great! Since then I use them for my warm-up (10-15 reps on the Z-1, Z-2, Z-3) before a bouldering/hang board session and went from the Captains of Crush No. 2.5 to the No. 3 in maybe 4 months without even touching the CoCs. In preparation for the certification I focused on the CoCs of course!

“I am a passionate rock climber for over 24 years, with the main focus on bouldering (climbing on little rocks/blocks). In the last few years I tried some other grip-related stuff, too, like nail bending, horseshoe bending and similar things (I ripped a tennis ball apart some time ago). At the moment I'm in preparation for my first ever grip-competition, which means I'm playing around with the Rolling Thunder and the IronMind Hub.

“I'm a teacher for chemistry and physical education and have got a degree in training science. My main hobby is rock climbing (especially bouldering) and traveling to different (or new) climbing areas. Beside that my interest in sports is really diversified: I not only like the raw (strength-oriented) side of human movements, but also the balance-coordination affected side.   “For me it is as cool to snatch bodyweight, bend a Red Nail or perform a One Arm Pull Up as it is to walk a slackline, to hit a triple or to play a perfect ball in volleyball,” said Mertz.

Mertz (who is 38 years old, stands 182 cm tall and weighs 105 kg), was impressive on his official attempt: His referee, Dr. Hermann Korte told IronMind, “Following the rules he closed the CoC No. 3 Gripper first on the right hand and right after with his left hand. It did not take him long and he did it in a way that seemed to be easy.”

Incidentally, Dr. Korte—long at the center of the German grip strength community—has probably served as the referee on more IronMind certification attempts than anyone else in the world, so his comments carry a lot of weight.

Many thanks, once again, Dr. Korte, and congratulations, Carl: your name has been added to the certification list for the Captains of Crush No. 3 gripper.

Follow these links to the video of Carl’s official attempt: