IFSA founder Dr. Douglas Edmunds makes no bones about it: He calls Callander "the birthplace" of modern strongman, and he points to the long procession of greats who have come through this Scottish town. 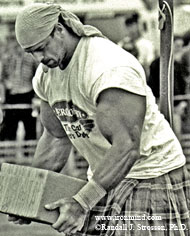 Sigmarsson, Kazmaier, Ver Magnusson, Ahola . . . . the list goes on and on: Nearly every great strongman in the last quarter century has competed at Callander, Dr. Edmunds said. "They all came through Callendar, through the Highland Games . . . it's a great Scottish tradition."

And this weekend continued down the same path, Dr.Edmunds said, with Geoff Dolan notching up an impressive overall victory and the new Russian phenom, Mikhael Koklyaev, making a big splash.

Mikhael Koklyaev became "one of the first to lift the 180-kg Alba Stone," Dr. Edmunds said, and "he astonished us all by throwing the 56-pound weight over 17 feet on his first attempt . . . of course dressed in the kilt."