Without even baring his teeth, Phil Pfister pointed out that his IFSA stage name is "The Wolfman," not "The Wolverine," as an IFSA spokesperson had earlier told IronMind® - regardless of what you call him, though, Pfister is upbeat about the future of strongman and his role in the sport. 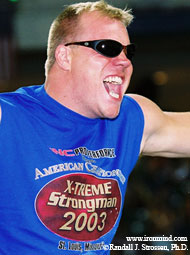 Phil "The Wolfman" Pfister growls as he hangs on during the Hercules Hold at the 2003 US Championships, put on by Jim Davis in St. Louis. IronMind® | Randall J. Strossen, Ph.D. photo.

"The Wolverine" had never sounded right for a guy who is about six feet six inches tall and weighs about 330, and, as Pfister explained, "The Wolfman" goes back to his roots in the sport.

Facing a cheat curl with an oxygen cylinder, no time limit, in his first strongman contest back in 1998, Pfister said he developed "a survivalist mentality . . . We've all heard the story about the old lady lifting a car off a child. If I could tap into that psyche, then I figured I would do ok in strongman."

Phil "Stonehenge" Martin was a referee that day, and when he called IronMind®, Phil Pfister was the reason for his excitement.

"You could practically see the fangs growing from event to event," Martin said, comparing Pfister's never-say-die mentality to Scottish legend Forbes "Lion Heart" Cowan, a strongman competitor whose ferocity on the field allowed him to perform at a level far beyond what one would have predicted based on his lifts in the gym.

Pfister has only competed once so far this year, in Hawaii, and he says that he is taking good advantage of having some time off: "I've enjoyed the opportunity to focus on my training rather doing so many contests," The Wolfman said, noting he's hit PRs in overhead lifts and in deadlifts.