IHGF CEO Francis Brebner has filed a report with IronMind on the Las Vegas Highland Games, where Brittany Pryor made a sensational debut in the sport. 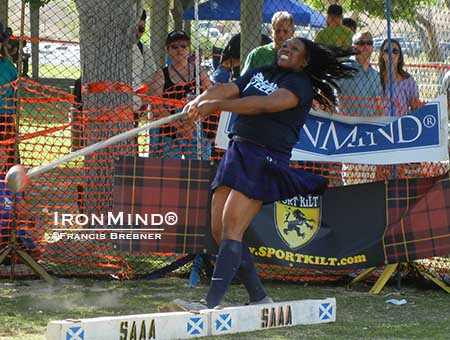 Brittany Pryor has been tipped as a potential world champion in the Highland games heavy events.  IronMind® | ©Francis Brebner photo

The 10th annual Las Vegas Highland Games this past weekend attracted bumper
entries from novice, women’s, masters’ and amateur men’s A, B and C
divisions, a staggering 127 athletes in all, making the Las Vegas Highland
Games the second largest grouping of athletes ever over a two-day Highland
Games.  The Arizona Scottish Gathering and Highland Games currently has the
most recorded to date at 135.

One of the highlights of the games was watching the new sensation, Brittany
Pryor of Las Vegas, who competed in the woman’s A class in her first-ever
Highland games.  Showing her athletic talent and winning five of the nine
events, Brittany, who comes from a track and field background and who also
has competed in powerlifting and strongwoman, has now added Highland games
to her resume.  She was competing against a very tough field of athletes,
featuring Heather MacDonald, Beth Burton, and Ivory Carr to name a few, all
of whom placed in the 2014 Woman’s World Highland Games Championships top
ten.

In the 16-lb. heavy hammer, Pryor, who excels in the track and field wire
hammer, one of her signature events, made easy work of the Scots hammer,
especially for throwing it for the first time in competition.  Her winning
distance was 78’ 2-1/2”, followed by Burton at 74’ 5” and MacDonald at 65’
2-1/4”.

The 28-lb. weight-over-bar was a high point of the games weekend as Pryor
surprised everyone by clearing 18’.  Burton did 16’ for second and MacDonald
15’ for third.  Pryor later attempted the height of 19’ but just missed
getting the arc needed to clear the bar.  Some of Pryor’s attempts reached
heights in excess of 20’ but all were out in front of the bar, still very
remarkable for someone who has never competed in the sport, especially when
you think that the current world record stands at 20’.

MacDonald won the 10-lb. sheaf toss with a height of 24’; second equal were
Burton and Pryor with 21’.

The final event, the caber toss, was won by Burton with a 1:30 toss.  Second
place went to Ivory Carr with a best attempt of 65 degrees and third place
to MacDonald with 60 degrees.

The newly appointed athletic director for the games, Jason Corder, and SAAA
president Charles McLean were delighted with the number of entries for the
games and the influx of novice athletes taking up the challenge of the
sport, and also to have the new sensation in the women’s A group, Brittany
Pryor.  She, by the end of the day, had a flood of supporters and has been
already tipped by many as a possible future world champion if she continues
in the sport. 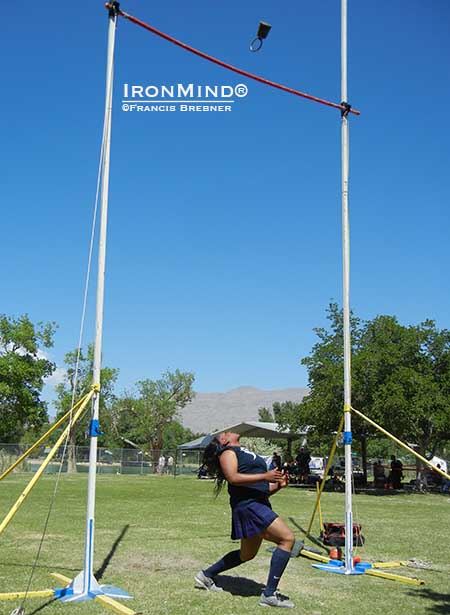 With the bar set at 19 feet, look at the height of Brittany Pryor’s attempt and you can see why she’s likely to be attacking the weight for height world record soon.  IronMind® | ©Francis Brebner photo