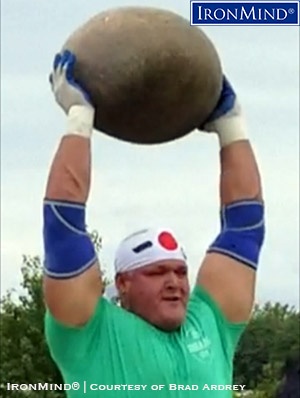 The concluding qualifying round in the IHGF All American Stones of Strength series took place in Dublin, Ohio, at its Dublin Irish Festival; this strength event was the first of its kind, beside the Highland games, to be contested at the gathering and was well-received by the several thousand spectators. The competitive lineup of athletes included Mike Congdon, Brad Ardrey, Ryan Putzulu, Dusty Davis, Frank Quartucci, Jordan Hieber, Trevor Rutkowski, Joshua Eisele and Zac Durr, who engaged in five stone lifting disciplines.

In the 60-lb. stone putt, Congdon led the way from the first round with a throw of 17’ 4” and then upped the ante, finishing with an impressive 18’ 8”. Second place was very close with Rutkowski inching ahead with 17’ 3”, leaving Ardrey and Quartucci in a tie for third at 17’ 1”.

The 330-lb. Husafell stone carry had the fans cheering athletes throughout. Putzulu, going first, set a respectable benchmark of 91’. Eisele took off like a sprinter and ripped out a distance of 250’ 6” to take the lead, and just when it looked as if he had it in the bag, Rutkowski surpassed him with a crushing distance of 305’ 3”. Congdon produced a best of 238’ for third.

Athletes had 60 sec. to lift the 350-lb. stone with a handle in the duck walk and carry it over a course of 10 m. Just tenths of a second separated the top three, with Ardrey winning with 6.4 sec., Quartucci in second with 6.6 sec., and Congdon in third with 6.7 sec.

In the manhood stone, athletes had to lift a stone weighing 200 lb. onto their chest and then press it overhead and repeat as many times as possible within 75 sec. Ardrey did a magnificent 9 reps, followed by Rutkowski, who gave his all for 7 reps. Putzulu was third with 6 reps.

The top four athletes—Brad Audrey,Trevor Rutkowskie,Mike Congdon,Frank Quartucci—have qualified and will go through to the finals of the IHGF All American Stones of Strength Championships set for the 14th-15th of October in San Clemente California where the winner will go forward to compete in Fefor, Norway in 2018.