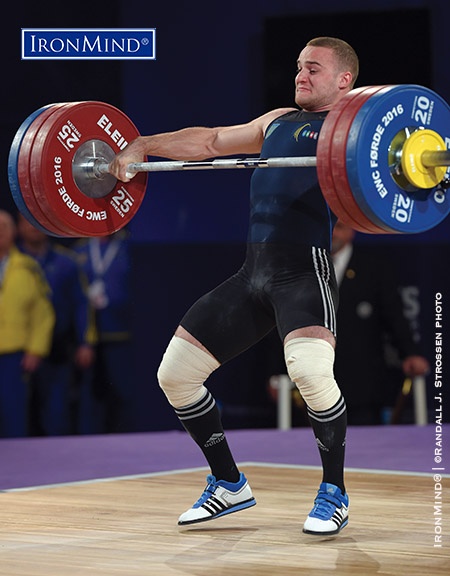 Forde, Norway—Looking at all the red on the scoreboard, you’d think sharks visited the 85-kg class at the 2016 European Weightlifting Championships, but after many missed lifts and some notable bomb outs, Oleksandr Pielieshenko (Ukraine) and Gabriel Sincrain (Romania) dueled down to the wire, with Pielieshenko edging Sincrain by 1 kg for the gold medal in the total.

Sincrain took the upper hand in the snatch, winning the gold medal with a 169-kg lift, and Pielieshenko, 1 kg behind, got the silver medal in the snatch.

The two lifters continued their head-to-head struggle in the clean and jerk: after missing 204 kg on his second attempt, Pielieshenko came back to make the lift and was in gold medal position in both the jerk and the total, but Sincrain had one attempt left.

Calling for 205 kg in an effort to overtake his rival, Sincrain cleaned the weight strongly only to miss the jerk, so he had to settle for second place in the jerk and the total.

Watch for the complete report in MILO.