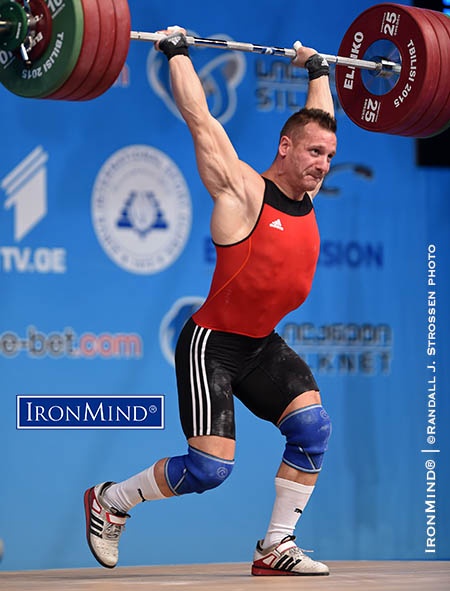 Benjamin Hennequin won the gold medal in the clean and jerk and in the total, in the 85-kg class at the 2015 European Weightlifting Championships. IronMind® | ©Randall J. Strossen photo

Tbilisi—At the 2014 European Weightlifting Championships, Benjamin Hennequin (France) cleaned and jerked 206 kg for the silver medal in the jerk and totaled 367 kg for the bronze medal in the total. This year, he totaled the same 367 kg and jerked 5 kg less, but in 2015 those numbers earned him two gold medals.

Most notably absent from this year’s field was Ivan Markov, last year’s winner and one of the athletes caught up in the latest Bulgarian doping positives. Also, Alexey Yufkin (Russia) the 2011 European Weightlifting Champion was well below his standard in Kazan.

Hennequin is known to be very strong in the clean in jerk but he finds the snatch more challenging so for him to place overall, he has to limit the amount of ground he loses on the leaders in the snatch. Since he can’t control what others lift, his goal has to be to focus on doing his best and last night he did just that: he followed a good opener (157 kg) with another success (162 kg) on his second attempt. One could sense that Hennequin was very pleased with the way the 162-kg lift had gone and riding that momentum to another good lift, he made 165 kg on his third attempt.

Iurie Bulat (Moldavia) also made three good lifts, but he ended with 172 kg, for the gold medal in the snatch, and Mikalai Novikau (Belarus), whom we have not seen at the European Weightlifting Championships since 2011, got the bronze medal with 166 kg—about where he would usually land, excluding his 171-kg snatch in Minsk in 2010.

Hennequin was up next, opening with 198 kg for first place position in both the jerk and the total and he made a good lift, although the jerk was a little rough looking. Yufkin followed with the same weight on his second attempt and made a nice lift—better looking than Hennequin’s attempt and, of course, much better than the 190 kg he had missed on his opener. Novikau cleaned 198 kg, then quickly and powerfully jerked the bar overhead but dropped it behind.