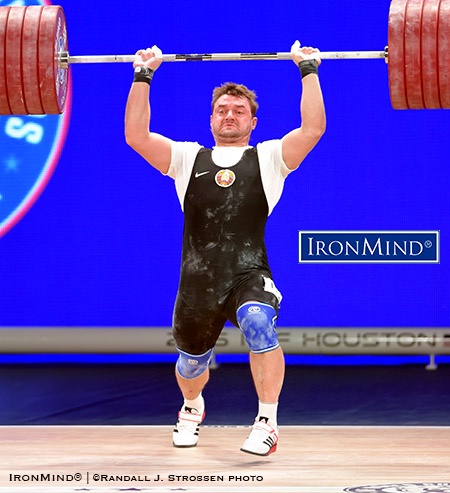 Vadzim Stralsou drove himself under this 230-kg jerk that gave him the gold medal as well as the overall victory in the men’s 94-kg class at the International Weightlifting Federation World Championships. IronMind® | ©Randall J. Strossen photo

Houston—Vadzim Stralsou (Belarus) finished sixth in the snatch but his winning clean and jerk also gave him the gold medal in the total, in an impressive come from behind victory.

Pre-competition favorite Zhassulan Kydyrbayev (Kazakhstan) made his opening snatch of 178 kg but then missed 183 twice, leaving him with the bronze medal, and foreshadowing the problems he would run into. Aleksei Kosov (Russia) won the snatch with 181 kg, and Arimas Didzbalis, who took three tries to succeed with 180 kg, got the silver medal. China continued to struggle as Liu Hao bombed with 173 kg.