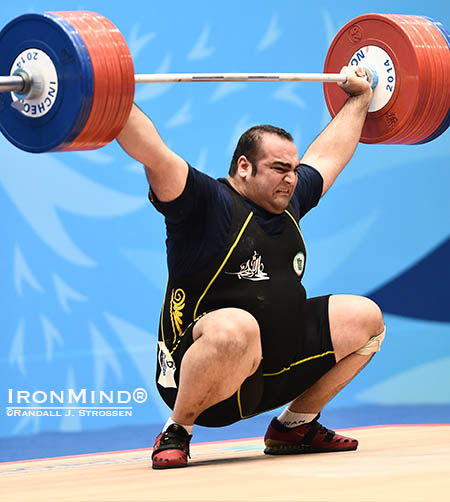 Attacking his own world record in the snatch, Behdad Salimi had 215 kg overhead, but could not fix the bar. IronMind® | Randall J. Strossen photo


Salimi won the class by a whopping 40 kg and took a good shot at snatching 215 kg. He opened with 241 kg in the clean and jerk, for a successful lift, and then made another good lift with 255 kg on his second attempt—for a 465-kg total and a clean sweep of the Asian Games weightlifting records in the +105 kg category.

Salimi passed on his third attempt, and the plan is for him to be in even better shape for the World Weightlifting Championships, so stay tuned for more fireworks in Almaty later this year.