“On Saturday we had our last contest for this season, the first German Team Championships,” strongman contest organizer Heinz Ollesh told IronMind®. 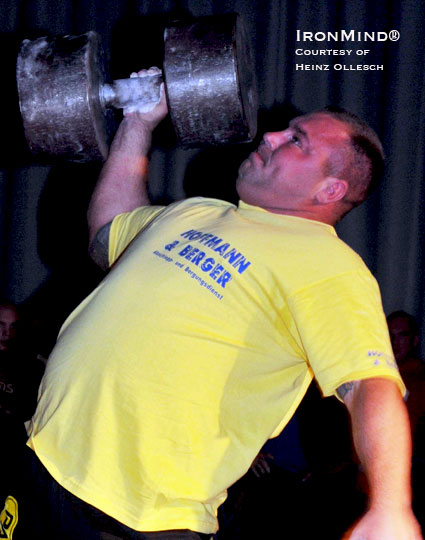 
“Here in Germany we have 16 states and we had 7 states competing against each other,” Ollesch explained, “plus one team from Slovenia as a guest team.”

Ollesch said that his, “goal for the future is to have from every state a team.”

Baden Württemberg was the winning team this year, “with Team Captain Igor Werner (Germany's Strongest Man 2007) and Patrik Baboumian (World record-holder in the log lift 105-kg class).  He is preparing for a bodybuilding contest next weekend and is still pretty strong,” Ollesch said.

Looking to the future, Heinz Ollesch said, “Our preparations are running already for the FIBO next year.  The plan is to have an even bigger contest as this year, a Strongman Champions League contest for Eurosport is the goal.”