Reporting "BIG NEWS from the Karlsen Mansion," Lene Karlsen told IronMind®, "Guess who will be present in Mohegan Sun on 19th January" 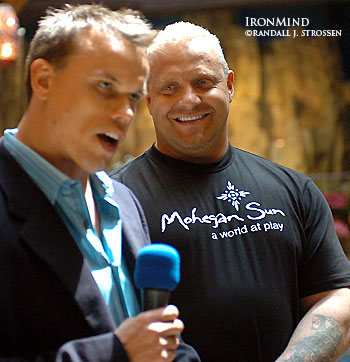 
"Yes, we both will come over for the weekend: Svend will do TV together with Colin . . . I will just look good."

"We are very excited about this - it's important that people can see that the Viking is still alive."

More than merely alive, the Viking is doing well, as he awaits his kidney transplant, and if you needed one more reason to make it to the Mohegan Sun later this month, now you have it.

Actually, this is two more reasons because from what we heard, there was no shortage of guys lined up at last year's World's Strongest Man contest asking Lene Karlsen to autograph their MILO®s.

The WSMSS Mohegan Sun Grand Prix is January 19, with a 7:00 pm start time, and tickets are available now.