You know how it goes in strongman: someone’s boy gets an edge and the guys on the other side resent it; and Downunder, this familiar script has been taking the form of Bill Lyndon and Derek Boyer on one side of the line, and Warrick Brant on the other. 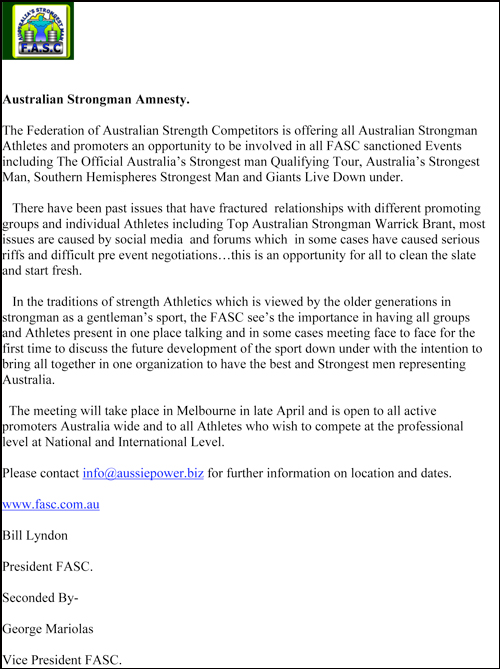 
Yesterday, Bill Lyndon sent IronMind a letter outlining his proposed amnesty—before publishing it, though, we wanted to invite Warrick to make a comment and then open the door for Bill again.

"I have always said Australia needs to have a fair well organised well supported strongman federation.  A federation where there is no favouritism or cheating. A federation where is does not matter who you are, where you come from or what other competitions you have done. A federation for the athletes not for the promoter.  It's the athletes who bust their balls all day, sacrificing their blood and sweat.  Why do we do it? It's not for fame or fortune as we are still far away from that.  We do it for the love, the passion and for the pride in ourselves.  If Bill wants to create a unified strongman community here in Australia then he has a lot of apologies to make, a lot of bridges to re build and certainly a lot of the wrongs need to be made right.  The athletes would love to have a clear direction for the sport here in Australia and we welcome Bill to step forward and present his ideas."

The easy way to explain this situaton is that i have only met Warrick two times and both very breifly but a lot has been said via emails and forums by many people in a negative way against my name including some new promoters, the purpose of the amnesty is to meet face to face and sort out the differnces and move forward past old issues and start fresh... There are now lots of oportunitys down under for everyone after years of hard work on my part and i want to show that im open to all and not a closed person as all the alegations are stating...Im old school Randall and some may think im strict but its a missunderstanding on many levels ,its important that standards are in place so the right athletes are representing the Australian strongman brand...I think this is relevent in many Nations and if this Amnesty sets a precedent to stop backtalk and National infighting mostly from modern media its a positive action.”