"The future for strongman down under is alive and well,” Aussiepower’s Bill Lyndon told IronMind®, “with a thriving group of amateur athletes chomping at the bit to get hold of anything heavy and a new breed of promoters trying to lift the profile of the sport.” 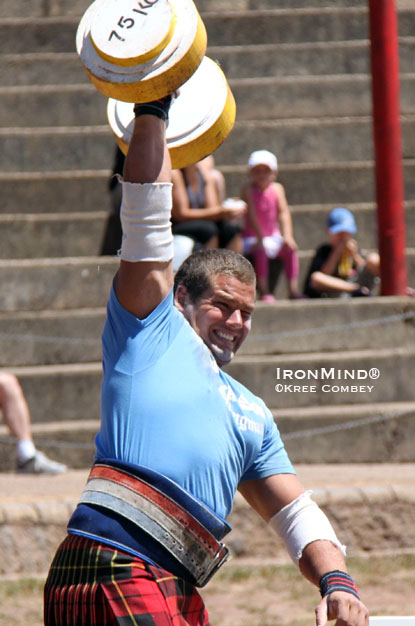 “Rauno Heinla from Estonia (In Australia for 9 months) was a great performer, and at 110 kg was a surprise for many for his great result,” Bill Lyndon told IronMind®.  IronMind® | Kree Combey photo.


“We have plans to further develop events in the region, with the next big event being the Australian Hercules scheduled for the middle of this year, followed by the Hercules in October.”

Bill Lyndon has wasted no time getting 2010 started right as he had strong showing at his recent Australian Highlander 2010 contest, run on Australia Day.

Lyndon said the Australian Highlander produced a high level across the board and standout performances [included]  “Rauno Hienla winning the dumbbell with 11 reps,  Eben LeRoux and Rauno Hienla with a tie on 26 reps on the 290-kg deadlift, Jeremy Hogg winning the barrow in very fast time of 13.22 for 20 meters with 300 kg at the handles, Rauno Hienla with the Valhalla stone at 152 kg for 78 meters and Rauno Hienla clearing the 1,200 mm crossbar with 5 stones in 29.4 seconds.

“There were some great battles that thrilled the crowd with many people seeing strongman for the first time and enjoying the experience, with Eben LeRoux and Jeremy Hogg close all day, and Luke Reyolds, Lance Holland-Keen and Marc Wells battling it out for the midfield,” Lyndon told IronMind®.

“This result gives the top 5 place getters a spot in the Australia’s Strongest Man, which will be held in Lismore, New South Wales the first week of June.  This was a great event with most of the field never having competed against each other [and] with the biggest group of Australian strongmen in an open class event ever to take the field in recent times.”

Here are the final places and points for the 2010 Austalian Highlander.

“All the best and well done to all competitors,” Lyndon said.  “It was a great example of strongman at a very competitive level and was well received by the Castle who are already putting plans in place for next year’s Australia Day.”

For more on strongman from Australia, please visit the Aussiepower website.