With many of the world's top athletes, coaches, sport administrators, photographers and journalists converging on Athens for the Olympics, all eyes in the strength world will turn to the weightlifting competition, where Iran's Hossein Rezazadeh is the pre-emptive King of the Jungle. 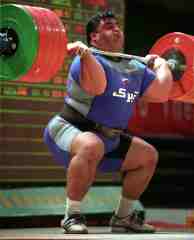 Besides being the reigning Olympic champion, Hossein Rezazadeh holds all three super heavyweight world records in the sport, which is part of the reason many weightlifting experts see Rezazadeh as being in a class by himself and almost view the defense of his Olympic title as something of a formality.

Historians, among others, would argue against getting too confident, thinking of how at the 1956 Olympics, Paul Anderson (USA) was regarded as an absolutely certain winner, yet circumstances converged to bring Anderson's victory down to his last do-or-die attempt, and whatever the outcome in Athens, the lifting is sure to be filled with the kind of drama that makes waiting four years worth every minute.

Check your local listing for TV coverage from Athens, and in the US, the TV schedule can be found on NBC.