Pyeongtaek, South Korea—If I told you that China’s Shi Zhiyong won the men’s 69 kg class at the Asian Weightlifting Championships, you’d say, “Really, did he move up?” 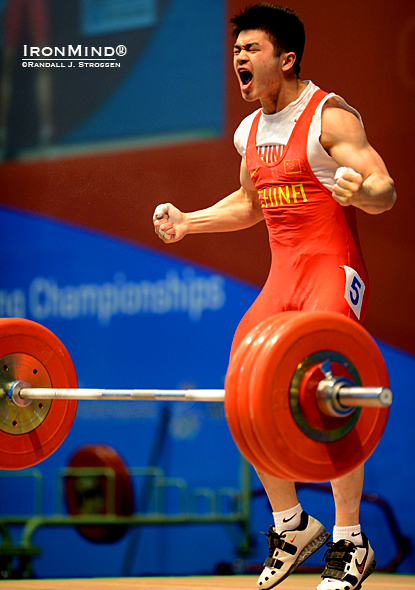 Shi Zhiyong (China) celebrates the go-ahead 180-kg clean and jerk that ended up giving him the gold medal for the jerk as well as for the total in the 69-kg class at the Asian Weightlifting Championships today.  IronMind® | Randall J. Strossen photo.


That’s because you’d be thinking of the 2004 Olympic gold medalist in the 62-kg category, but that’s not the same guy, although besides having the same name, both are (were) squat jerkers.

Fast forwarding in the snatch, Sajad Behrouzi (Iran) snatched 148 kg on his second attempt, for gold medal position with three attempt left—one was his and two belonged to Liu Weihuang (China).

Liu made 149 on his second attempt, but the Iranians protested and the jury overruled the lift; he took it again and missed it, giving Behrouzi the snatch gold medal.  Behrouzi took 151 on his third attempt, but only did a pull with it.  Three lifters snatched 144 kg—Won Jeonsik (Korea) got the silver medal, Shi Zhiyong got the bronze medal, and Liu Weihuang was probably kicking himself for the extra bite of toast he had at breakfast.

Shi missed 180 on his second attempt clean and jerk, while his teammate, Liu, made it.  Shi was lighter, and when repeated the 180 for a success, he moved into gold medal position in the jerk and in the total, and assumed the role of target for the lifters who still had attempts left.

One of those was Behrouzi, who was lighter than than Shi and had missed 180 on his second attempt.  He then did the same thing on his third attempt.  Next up was Liu, who was heavier than Shi, and since they were tied on total at that point, he moved to 181 to leapfrog over his teammate in the jerk and in the total, but he missed the jerk.

With one attempt remaining, Morteza Rezaeian (Iran) had a chance to do what Liu had attempted, but to overtake the leader, he needed to make 184 kg in the clean and jerk.  He’d opened with 171, succeeded, and then made a good lift with 177 so the 184 seemed possible—even if he missed it, things would be exciting if he didn’t fold in the face of the challenge.

Rezaeian came up to the bar, prayed, looked all business, grabbed it, and after lifting it to his ankles, walked off with about 30 seconds left.

When the dust settled, Shi had the gold medal in the jerk and total on body weight over his teammate Liu (who must also have been thinking about what he’d had for breakfast), and Behrouzi, one kilo behind, had the bronze medal.

Following up on the injury suffered by Citra Febrianti (Indonesia) yesterday, a member of the medical team told me today that she is doing well, and this was confirmed by a member of the Indonesian team.