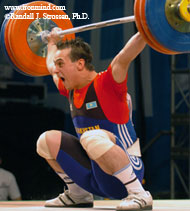 Ilya Ilin (Kazakhstan) sinks the putt on this 168-kg snatch, as part of his riveting performance in the 85-kg category at the 2005 Junior World Championships (Busan, Korea). IronMind® | Randall J. Strossen, Ph.D. photo.