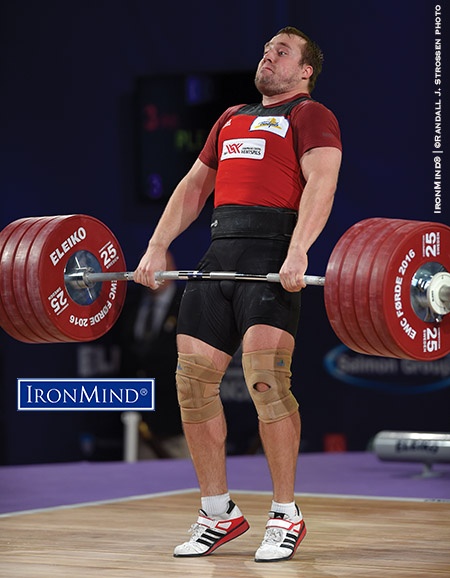 For the money: Arturs Plesnieks (Latvia) finishes the pull on his 226-kg third attempt clean and jerk. Plesnieks made the lift, thereby claiming the jerk and total gold medals in the men’s 105-kg category at the 2016 European Weightlifting Championships. IronMind® | ©Randall J. Strossen photo

Forde, Norway—With his eye on the finish line, Arturs Plesnieks (Latvia) paced himself from fifth place in the snatch to first place in both the jerk and total—claiming those gold medals on the final attempt of the men’s 105-kg category at the 2016 European Weightlifting Championships.

Appearing to be lifting well within his capabilities in the clean and jerk, Plesniaks opened with 217 kg, the highest first attempt in the class, and even though he dispatched the lift with no apparent difficulty, he subtly showed some dissatisfaction with its execution.  Turns out that was not mere show because his second attempt, 222 kg, looked easier and better than his opener.

Simon Martirosyan (Armenia), silver medalist in the snatch, who had shown that he planned to be a player to the end, had made 220 kg on his second attempt, putting him in gold medal position on the total, and looking to extend his lead, he took 225 kg on his third attempt, but missed the jerk.

Arkadiusz Michalski (Poland), who had finished sixth in the snatch, cleaned and jerked 226 kg on his third attempt, overtaking Martirosyan for the overall lead, and there was only one attempt left.

Plesniaks had been in for 230 kg for his third attempt, but he lowered it to the 226 kg he needed for both the jerk and total gold medals, being lighter than Michalski, and then he turned the theory into reality.