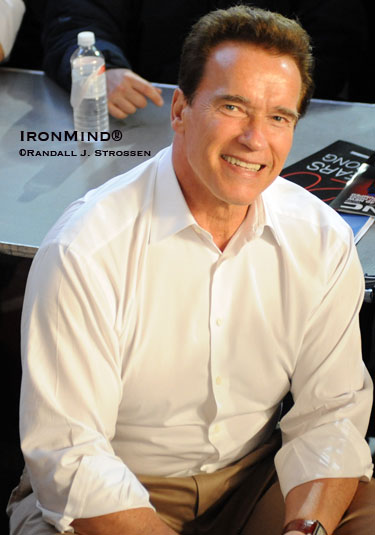 California Governor Arnold Schwarzenegger sat ringside throughout the entire IronMind® Invitational at the Arnold Sports Festival today, where he chatted with Matthias Steiner and his Olympic weightlifting teammates before and after the exhibition. IronMind® | Randall J. Strossen photo.

Olympic gold medalist Matthias Steiner said that Governor Schwarzenegger was his hero and the possibility of Arnold being in Beijing fueled both his final preparation and his dramatic performance on the lifting platform. Showing just how seriously he took Steiner's Olympic victory, this afternoon Governor Schwarzenegger chatted with Steiner before the lifting started on the main stage of the Exposition Hall of Greater Columbus Convention Center; he sat ringside throughout the entire exhibition, and then came on the stage to chat some more with Steiner and his German Olympic teammates.

Steiner told IronMind® that Governor Schwarzenegger explained how he had originally trained as a weightlifter because that was the system in Austria, and only later did he train as a bodybuilder; and that the man who has made the name Arnold known the world over was quick to extoll the many benefits of weightlifting. 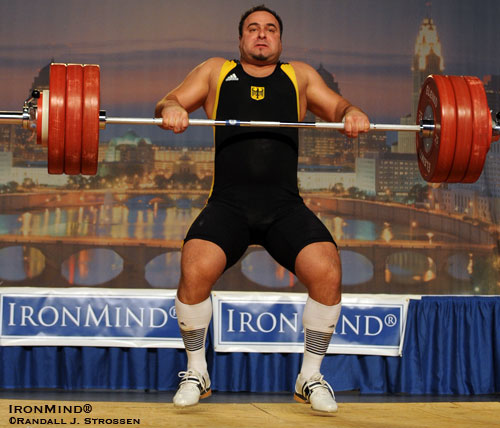 
Signaling the importance of the event, German television had sent multiple crews to cover the anticipated meeting between the two men, creating a media frenzy around a weightlifter never seen before the Arnold Sports Festival and rivaling anything seen abroad. 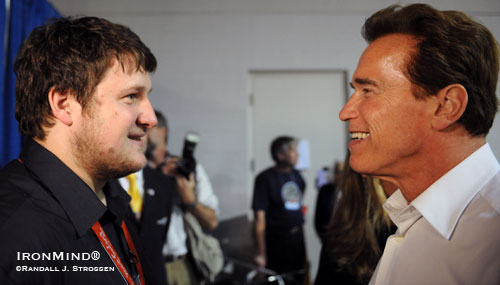 First Matthias Steiner dreamed of winning an Olympic gold medal and then he dreamed of meeting California Governor Arnold Schwarzenegger. On August 19, 2008 the first dream was fulfilled in Beijing, and today the second one was fulfilled in Columbus, Ohio. IronMind® | Randall J. Strossen photo.