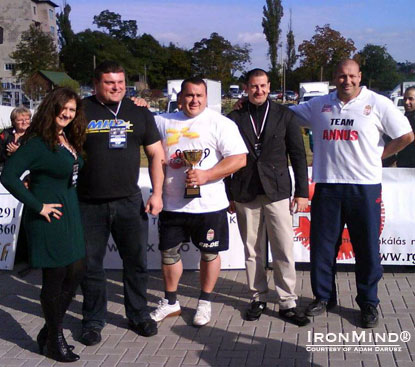 
“These athletes will be one event win away from earning a birth at the Arnold Strongman Classic,” said Wessels in what might sound more like hyperbole than fact, but consider some of the contest’s alumni.

“Michael Jenkins' meteoric rise is a direct result of his win at ASC's Arnold Amateur show,” said Wessels.  “The same can be said for Mateusz Baron, Haftor Julius Bjornsson, and Michael Burke.  ASC has created yet another contest that is not a stepping stone, but a launch pad to upper echelon of the strongman universe.

“The international community is taking notice; the Strongman Fit Parade in Hungary not only qualified an international athlete for ASC's Arnold Amateur Strongman World Championship, but is also paying the athlete's expenses,” said Wessels.

Watch the IronMind news column and the official ASC website for updates on the Arnold amateur strongman contest.