Wroclaw— Coming into this competition, he seemed to be the man of the future in the 85-kg class and by winning the 2013 World Weightlifting Championships tonight, plus taking a shot at the world record in the clean an jerk, the future is now for Apti Aukhadov (Russia). 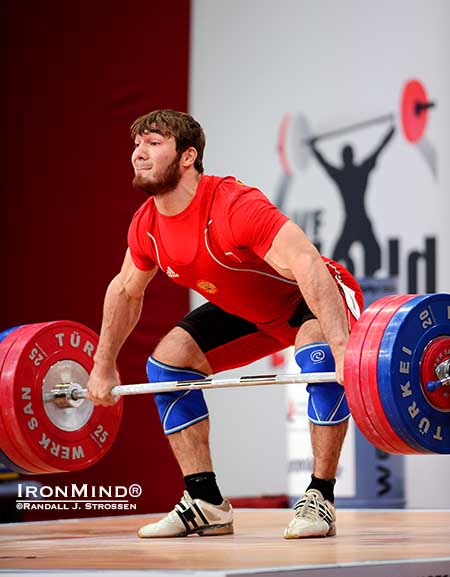 Give him the platform generalship award: from his first snatch onward, Apti Aukadov was a commanding presence and he exuded Winner at the 2013 World Weightlifting Championships.  IronMind® | Randall J. Strossen photo


With world record holder in the snatch, Andrei Rybakou (Belarus), in the field, it seemed pretty sure that he’d win the gold medal in that discipline and he did, but it wasn’t exactly easy: after making 175 kg on his opener, he lost 179 kg at the last instant as he was starting to recover, but when he repeated on his third attempt, there were no mistakes.

The rest of the snatch medals came down who-had-what for breakfast as three lifters made 175 kg: Ivan Markov (Bulgaria) was the lightest, so he got the silver medal; Aukhadov was next and in for the bronze, and the man who packed the venue tonight, Adrian Zielinski (Poland), being the heaviest left empty handed.

Last man to snatch and the second to clean and jerk, Rybakou was in with 194 kg for his opener—less than 10 kg over his snatch world record—and he missed the clean, so just remember that if you ever think your own lifts are out of balance.

Artem Okulov (Russia) opened with 200 kg, and after missing 207 kg on his second attempt, he came back to make 209 kg for the silver medal in the jerk as well as the bronze medal in the total (getting bumped out of the silver on bodyweight by Bulgaria’s Ivan Markov).  Yoelmis Hernandez (Cuba) had been sixth in the snatch but he was roaring down the freeway in the clean and jerk: after making 204 kg and 208 kg, he had 212 kg overhead on his third attempt, only to have the jerk pop out at the last instant, but he was still good for the bronze in the jerk.

On the other side of things, Zielinski who ran out of platform trying to save his first jerk (204 kg) and then got his arms about halfway straightened on his second attempt (204 kg).  Back to the wall, but also backed by the full roar of the full house, he moved to 205 kg for his third attempt; and after having to work to stand up in the clean, he made a good jerk.

Aukhadov made his 205-kg opener look like a warmup—he power jerked it with apparent ease; 212 kg went about the same way, so, being the proud winner of the gold medals in the jerk and the total, he called for 219 kg on his third attempt, going for the world record, but he wasn’t able to get under the bar.

Continuing with a couple of words about what’s making this such a well presented World Weightlifting Championships, I would say that one of the keys to their success is the way the Polish Weightlifting Federation has engaged the crowd—music, cheers, entertainment in between the snatch and the clean and jerk . . . people who come here are having a good time and are enjoying a sport that some of them, most likely, are seeing for the first time.