“Cameras will be rolling next week as the motion picture about the life and times of Louis Cyr, the mighty Canadian strongman of the past, will shift into high gear,” Paul Ohl told IronMind. 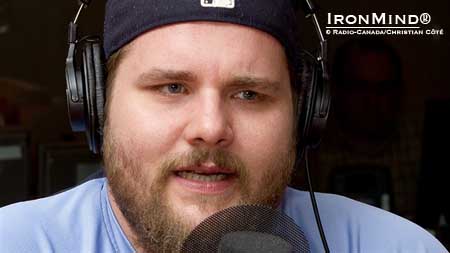 Antoine Bertrand will play the role of Louis Cyr, in a film inspired by Paul Ohl’s biography of the legendary strongman.  IronMind®  | Photo ©Radio-Canada/Christian Côté, courtesy of Paul Ohl.


“Up to this day, the big question was Who will portray Louis Cyr?  The answer is now out and confirmed by Christal Films, the producing movie firm behind the multi-million project.  It is a TV and movie fast rising star by the name of Antoine Bertrand.

“Antoine Bertrand is not only a great actor, he also happens to be a strongman fanatic who shares a good knowledge of the history of strongman.  He has read the biography over and over again in order to get into the right mindset and develop the appropriate body language, as close as can be to the one of the iconic strongman who is remembered, a century later, as maybe the strongest man of all times,” said Ohl, whose definitive biography of Louis Cyr inspired the film.

Ohl, who is a consultant to the filmmakers, told IronMind, “Antoine Bertrand stands over 6 feet tall at 290 lbs.  As an actor, he is in a class of his own given these statistics,” said Ohl, adding that Bertrand “has been training four times a week over the past months . . . tossing around a lot of iron and dieting.”

For Daniel Roby, the film’s director, “There wasn’t even a doubt about the talent of the man and his abilities to portray the legendary strongman,” said Ohl.   “The movie is expected to hit the big screen in June 2013.”