We just heard the rumor that Andrei Chemerkin was going to be competing in the 2005 Arnold Strongman contest. 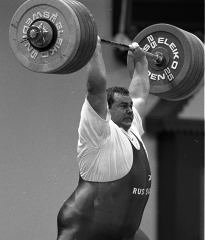 For the record, this is not true.

Andrei Chemerkin, whose credentials include a gold medal in weightlifting at the 1996 Olympics, continued the great Russian tradition of producing the world's top superheavyweight lifters. Chermerkin is retired from the sport and when he was originally billed as being on the start list at an earlier Arnold Strongman contest, he told me that he had never even heard of the event, let alone said he was coming. Chemerkin said the idea of him competing in strongman events was "crazy," not because he didn't enjoy or respect strongman contests, but because his discipline is so different and because he is retired.

In a case of déjá vu again, Andrei Chemerkin, speaking from his home yesterday, told me that he is not competing in the 2005 Arnold Strongman contest, although this time he knew what it was and he said that he had been approached about participating.

Retired as a weightlifter, Andrei Chemerkin left the sport as a world record holder, Olympic champion and world champion, although to many of us who watched it happen, his most remarkable effort led to none of those honors, but it will never be forgotten: At the 2000 Olympics, in a bid to win the gold medal, Andrei Chemerkin called for a 272.5-kg clean and jerk. He not only really went for the 600 pound lift, but he actually came close to racking the weight.