Chiang Mai, Thailand - Andrei Rybakou (Belarus) won the 85-kg category at the World Weightlifting Championships tonight, with a dominating performance that included a new world record in the snatch. 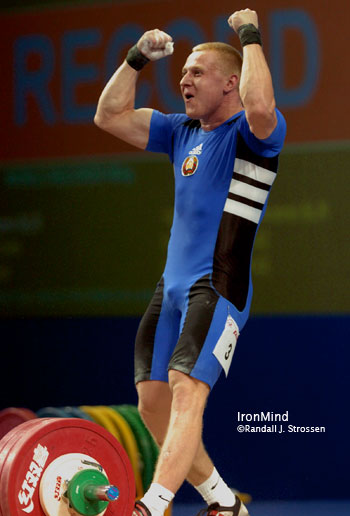 In the snatch, it became clear that this class, even in the A session, had two groups of lifters: Andrei Rybakou and all the other lifters. The silver medal in the snatch went to Asiambek Ediev (Russia), the remarkable 37-year-old lifter, who edged Georgi Markov (Bulgaria) on bodyweight - both lifters made 172 kg. The highest attempt after 172, was 175 kg, which Vyacheslev Yershov (Kazkhstan) missed on this third attempt, until Rybakou opened with 180, which he nailed. Rybakou followed with another good lift with 185, which set the stage for his world record attempt.

On his third attempt, Rybakou called for 187 kg, one kg over his own world record, and while he had to chase it a little to control the barbell, the lift never really looked to be in doubt.

After making a 200-kg opener in the clean and jerk, Rybakou had a second-attempt success with 206 kg, which put him in position to attack the world record in the total on his third attempt - he took 209, cleaned the weight, but missed the jerk. Still, he ended the night with a world record and three gold medals.