Russia's Andrei Chemerkin has great credentials as a weightlifter: He's an Olympic gold medalist and a MILO® cover guy - plus he attempted the all-time heaviest clean and jerk - so when he shares his view of who's walking off with the super heavyweight crown at this year's World Weightlifting Championships, it's time to listen up. 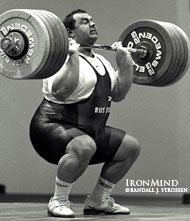 He didn't hesitate when asked: "Hossein Rezazadeh" was Andrei Chemerkin's pick, and even though that part seemed simple, Chemerkin told IronMind® that anything is possible in the future.

Asked about his country's top super, Evgeny Chigishev, who beat Rezazadeh in the snatch at the 2005 Worlds, Chemerkin said that he will sit out the Europeans this year and focus on the Worlds. Mikhail Koklyaev, according to Chemerkin, while a talented weightlifter, is content to be a strongman, and though he has produced big lifts in Russia, Chemerkin said, Koklyaev has never reproduced them outside of his country.

As sure as Chemerkin was that Rezazadeh would maintain his crown this year, what about the 2008 Olympics?

"Anything is possible," Chemerkin told IronMind®. "Maybe a Chinese lifter will emerge out of the blue and surprise everyone."