Beijing - The 105-kg class in weightlifting isn't short of entertaining lifters - whether it's Dimitry Klokov (Russia), and his primal screams, Ramunas Vysniauskas (Lithuania), who's one step shy of a pro-wrestling persona, or Dmitriy Lapikov (Russia), who looks likes he's ready for a casting call. 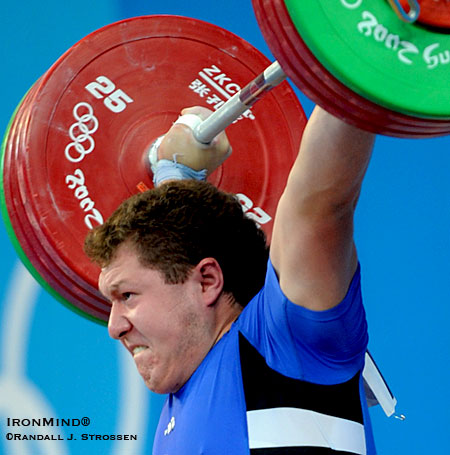 But the 105s also have a competitor who says it all with his lifting - if you look closely, you might see some clenched teeth, or if he's really getting wild, there might be a quick fist pump, but the message from his lifts is deafening: Tonight, Andrei Armanau (Belarus) won the gold medal, breaking five Olympic records, five junior world records and three senior world records. And even if you knew that he went six for six, unless you were there to see it, you might never guess that Aramnau seemed to be lifting well within his capabilities.

Klokov, very restrained, made 222 kg on his opening clean and jerk. Dolega made 225 kg on his opener, as did Aramnau, which moved him into the gold medal position he would never relinquish. Aramnau's lift was conspicuously easy, with a very quick jerk polishing things off, and it broke the junior world record in the total. Lapikov was making up ground in the clean and jerk and, having opened with a good 222 kg, he made a very nice 226 on his second attempt, to move into bronze medal position, but then Klokov made the same weight, bumping Lapikov.

Aramnau finished off his evening with a 236-kg clean and jerk - breaking the Olympic, senior and junior world records in both the jerk and the total, and the lift can be described in three words: easy, easy, easy.