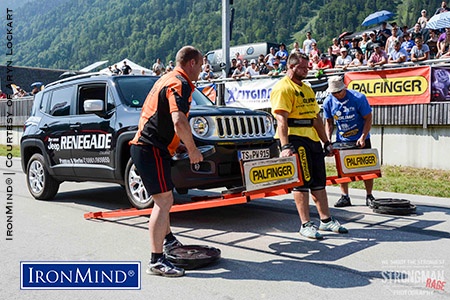 Andreas Altmann is the strongest man of Germany. On Sunday during the International Pro-League competition held in Ruhpolding, Germany, Altmann took the win for the day and became the overall German champion.      Sixteen athletes battled brutal heat for six events. The packed crowd braved temperatures above 35 degrees celsius to cheer on these amazing feats of strength. The events included a 145kg Viking Press, 7,5 ton Truck Pull, a 350kg Tire Flip, Farmer’s Walk with 125kg for 50m, Car Deadlift with increasing weight, and finally a Loading Event.

The German Federation for Strength Athletes (GFSA), run by Heinz Ollesch, uses a scoring system similar to the Strongman Champions League, accumulating points for competitions throughout the season. There were three Pro-League competitions with Altmann winning two of them.

“Andreas dominated today,” stated the Heinz Ollesch, who won this title an amazing 12 times before retiring from competition. “He finished first in four of the six events. I’m looking forward to seeing how he does in Croatia among the world’s strongest.”