Anders Johansson has been an international strongman competitor since 2002 and he’s no slouch, having won Sweden’s Strongest Man in 2006, 2007 and 2008 and turned in some very respectable performances against such top names as Mariusz Pudzianowski and Zydrunas Savickas, but this year he’s turning his focus to powerlifting, and his goal is to win the 2010 IPF European Powerlifting Championships. 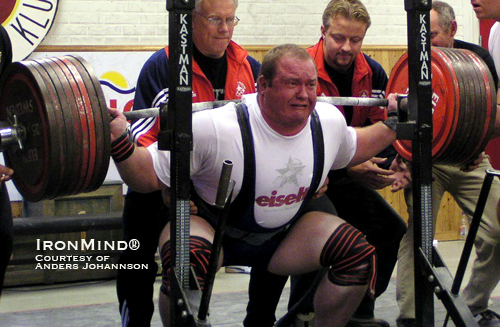 Even by Zydrunas Savickas’s standards, Anders Johansson is not wasting his time squatting, which is to say that Johansson does over 400 kg in the IPF—where a squat is still a squat.  IronMind® | Photo courtesy of Anders Johannson.


Over the weekend, Anders Johansson won the Swedish super heavyweight IPF title, with a 390-kg squat, 295-kg bench press and a 355-kg deadlift, for a 1040-kg total.  Johansson, who competed against Zydrunas Savickas in powerlifting as a junior, has posted some pretty big numbers in the IPF, with best lifts of 425.5-kg squat, 300-kg bench press and 375-kg deadlift, the sum of which puts him just under the current IPF European total record.

Anders Johansson has done some impressive things in strongman and to be sure, he’s proud of what he has accomplished, but don’t think that means he lacks perspective or a sense of humor as he told IronMind®, “The excellent development of the strongman results is going faster than my progress :-).”