Francis Brebner has just filed a report on the French Highland Games Championships. 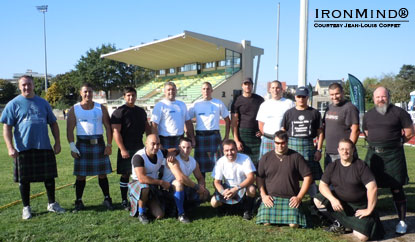 Interest in the Highland Games continues to grow in France and this year’s national championships drew 15 competitors.  IronMind® | Courtesy of Jean-Louis Coppet.

It was an important Highland Games in France as 15 competitors lined up to do battle for the French national title, which was finally won for the second successive year by local Association Sportive des Jeux d’Ecosse en France (AJEF) and Bocker athlete Amine Amroun, of Bressuire.

Jean-Louis Coppet, IHGF delegate for France, directed the heavy events and was assisted by judges Hans Lolkema and Martine Brunerie.  Throwing conditions were perfect with mild weather, and the athletics were held in the Bressuire stadium in conjunction with sports events honoring the twin town links between Bressuire, France and Fraserburgh, Scotland.

In the 16-lb open stone, Amroun claimed his first victory and set a personal best and a new French national record of 35’ 11-3/4”.  The 16-lb. hammer was thrilling for French fans as Eric Alagille (ASL Luzarches), the French hammer record holder, and Amroun went head to head.  For Amroun it was a sweet victory once again with a winning throw of 86’ 7-/12”, with Alagille in second at 82’ 1-1/4”.

The 28-lb. weight-for-distance was another close competition between Amroun and Alagille, with Amroun claiming his third straight win with a distance of 49’ 3-1/4”, and Alagille taking second at 47’ 1-3/4”.

At this point in the competition, suspense rose over who would capture the under-25 trophy, as three contenders—Jérémy LaFosse, Sébastien Pizon, and Cyrille Boucher—were very close in points.

Prior to the 56-lb. weight-over bar, it was expected that Bocker athlete Belkacem Smahi would again win over Amroun at 11’ 6-3/4”.  The event proved to be the climax in the 2011 championships as the field unanimously congratulated Thomas Tallet (St. Michel sur Orge) for an impressive victory as he raised the French record from 11’ 6” to 11’ 9-3/4”.

The atmosphere was even tenser with the caber toss as the newcomers were “stepping into the unknown” in attempting the Bressuire caber, which was 17’ long and 115 lb.  Alagille, the Luzarches Highland Games team leader, was definitely impressive as the only one to toss the caber in the first round, landing a 12:25.   Amroun dug deep but unfortunately all he could muster was 88 degrees.  On his second attempt, Alagille put even more pressure on the rest of the athletes when he secured a successful toss of 11:35.

In the third and final round in the caber, it all came down to the last toss, amazingly won by master athlete Smahi with a toss of 11:50, which secured the win for this exultant athlete and ensured his lead in the masters’ group.

When the five-event contest for the French National Championships was over, Amroun retained his crown as the best French Highland Games athlete, followed by Smahi in second, also of AJEF Bressuire; Alagille and junior Pizon (AJEF Bressuire) tied for third.

Pizon was also the best athlete in the under-25 division, with Smahi the best overall in the masters’ 40+ category for 2011.

“The man of the day” was Tallet, who topped his excellent heavy athletics performance with two wins and two new French records in the extra events:  the cork for distance was thrown to 24’ and the keg was cleared at a winning height of 12’ 4-1/2”.

Coppet, the promoter of the world-renown Bressuire Games, pronounced the national championships on the whole a big success in attracting more than 10,000 spectators.  He underscored “the satisfaction of sharing our success with the Fun and Leisure Games organized jointly in the stadium over the weekend with a total of 96 youths from Scotland (Aberdeen City and Aberdeenshire), Norway (Stavanger), Ireland (Leixlip), and France (Bressuire), who competed in the handisports boccia, wheelchair curling, 10-pin bowling, the blowpipe, laser shooting, and the local palet.  We couldn’t have celebrated the 20th anniversary of the twinning link . . . any better.”

The next major Highland Games in France will be held in Luzarches on 25 September, which will be the concluding games on the 2011 French Highland Games circuit and likely to be a fierce competition as the French athletes have a strong passion for the sport.