Bucharest - With four kilos separating the top seven places in the snatch, and the final outcome in the jerk and the total coming down to the last attempt, the 85-kg category at the European Weightlifting Championships once again delivered new faces and tight competition. 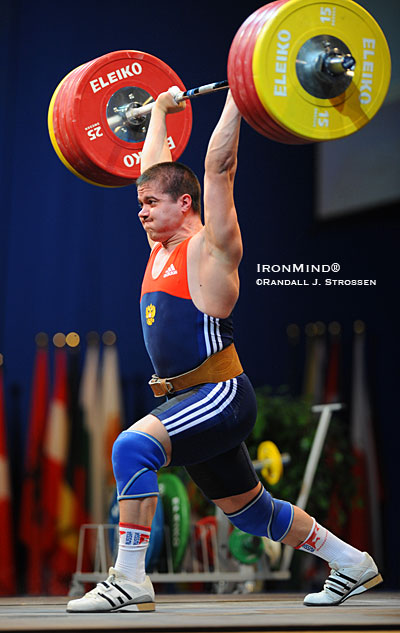 Aleksey Yufkin (Russia) stuck this 205-kg jerk, good for the gold medal in the clean and jerk as well as the total in the 85-kg category at the European Weightlifting Championships. IronMind® | Randall J. Strossen photo.

When Intigam Zairov (Azerbaijan) opened with 165 kg in the snatch, he immediately signaled that he was here to win the gold medal - even though this was the highest opener in a hotly-contested class, he was almost disdainful of the weight, which he snatched with complete ease. Mariusz Rytkowski (Poland) missed the same weight twice, and then Mikalai Novikau had a close miss with 166 kg, unlike Erdal Sunar, who wasn't close to making the same weight. Novikau came back and made the 166 kg on his third attempt, and then Adrian Zielinski made a good lift with 167 kg on his third attempt.

Zairov replied with a gold medal lift of 168 on his second attempt, although he re-settled in the bottom position before completing his recovery. Zairov had 171 overhead on his third attempt, but he ran out of platform trying to chase it under control.

Although he was only eighth in the snatch, Benjamin Hennequin (France) showed the promise of being a factor in the clean and jerk and possibly the total as well. True to this prediction, Hennequin opened with a successful 200 kg, a weight that Zairov had made for his first attempt; Yufkin missed the jerk on the same weight on his opener, raising some eyebrows, although he came back for a strong success with it on his second attempt. Novikau, going for first-place position in the jerk and second-place position in the total, called for 201 kg on his second attempt and he was successful. Plamen Boev (Bulgaria), who had been looking good throughout the competition, made 203 kg to finish up with a six-for-six day.

Hennequin, winding up for his final sprint to the finish line, made 204 on his second attempt, which moved him into gold medal position in the jerk and bronze medal position in the total. Zairov struggled up with 205 and wasn't close to jerking the weight on his second attempt, and then Yufkin finished his day with a powerful success with the same weight.

Trying to overtake Yufkin's lead in the jerk and in the total, Novikau took 205 and had it overhead, but then he lost control of the jerk. Zairov cleaned the same weight, but dipped without attempting the jerk, so ending his chances of wresting the lead from Yufkin.

There was one lift left and it belonged to Hennquin and based on his second attempt, the 207 he needed for two gold medals seemed possible, but after a hard recovery, he missed the jerk. Quel dommage!

This was another class packed with close competition!