A hearty congratulations to Swedish teenager Albin Lindskog, who has just been certified on the Captains of Crush No. 3 gripper. 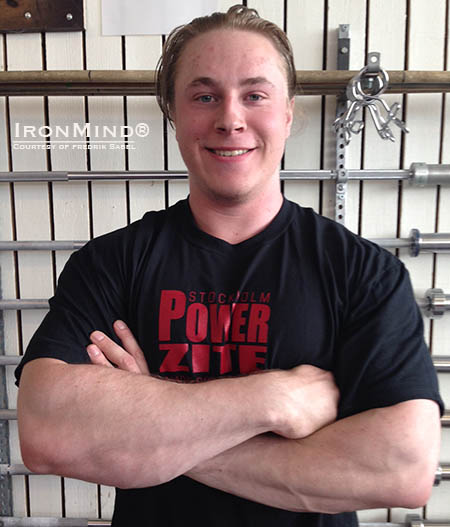 You could feel his smile as Albin emailed me this morning, “I can now, happily, inform you that the attempt was successful. I now, officially, have world-class grip strength.”

He was inspired by watching a YouTube video of World’s Strongest Man winner Magnus Samuelsson “demonstrating his grip strength and talking about his grip training. I got really excited and bought a CoC No.1. I couldn't close it the first time I tried. I took me about a month of heavy negative reps and general grip training before i successfully closed it for the first time.

“I train my grip four times a week. Two heavy sessions with heavy strapless overhand grip deadlifts and heavy gripper work, and two lighter sessions with wrist curls plus wrist and finger extensions. The purpose of the lighter session is mainly to prevent injuries. I build my grip training around a slightly higher number of repetitions,” said Lindskog.

Asked about himself, Lindskog modestly said, “There really isn't much to tell; being young, my story hasn't yet had the time to differentiate it from anyone else’s my age. Student by day, strength athlete by night.   “I've always prefered to stay away from attention and toil away in the dark, as a result I've never competed or have anything really to brag about yet. Soon, however, I'll be able to say I was the fifth person to close the CoC No.3 before the age of twenty.”

No kidding and talk about serious bragging rights—you earned them and IronMind is proud of your success.

Congratulations, Albin, your name has been added to the No. 3 Captains of Crush Gripper Certification List, and many thanks to Stockholm PowerZite owner Fredrik Sabel for refereeing your official attempt.

In honor of Albin Lindskog’s success, IronMind has donated $500 to the Jesse Marunde Educational Trust Fund, in memory of “the first teenage Captains of Crush.”