Francis Brebner has filed this report on the Alaska Highland Games, what he calls, "a smashing day." 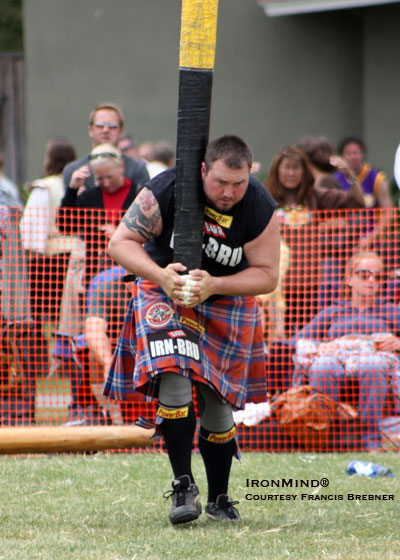 It was a smashing day at the Alaska Highland Games this weekend for Larry Brock, Harrison Bailey III, and Andrew Hobson, with a packed crowd in record attendance. Brock, Bailey, Hobson, and James Parman shared top billing.

Brock's record-breaking performances did not stop there, as he thrilled the crowds with a worthy performance in the 22-lb. hammer, setting another field record with 119' 8"; this broke his old record by over 5', which Brock had set in 2005. In second was Bailey with 111' 3", and in third, Hobson with 107' 3".

In the 56-lb. weight for height, however, Hobson, using the traditional standing method of throwing, set a new field record of 15' 6.5" for his first win, with a "very tough weight," Hobson added, breaking the field record previously held by James Parman from 2004. Brock came in second with 15', and Parman third with 14'.

Brock said, "This was a good Games for me. I am very happy with my performance and setting three field records - this is where I want to be with my throwing just before Sean Betz and I leave on our six-week tour of Scotland and Ireland next week, where I am hoping to establish some records in the motherland of Highland Games while I am there. I just love competing in Scotland."