Larry Brock won the Aboyne Highland Games in Scotland and Francis Brebner has reported on the action for IronMind®. 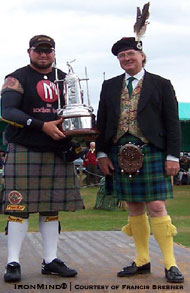 "Larry Brock is presented with the overall trophy by the Chieftain of the Games." IronMind® | Photo courtesy of Francis Brebner.

It was a great day of competition at the Aboyne Highland Games this weekend, in the heart of Royal Deeside in the north of Scotland.

In the opening event, the 22-lb. open stone, Scotland's big Bruce Robb, with a putt of 43' 5", won the event, with Bruce Aitken in second at 40' and Australia's Aaron Neighbour in the third spot on 39'.

In the 28-lb. weight for distance, Brock dominated his mastered event with a clutch throw of 81' 8" for a first-place win, with Robb having to settle for second at 78' 5" and Bruce Aitken in third at 76' 5".

The 24-lb. hammer was an excellent competition between the top three, with Bruce Aitken finally taking the win with a throw of 114' 5", with Brock in second at 108' and Bruce Aitken's brother, Steve Aitken, squeezing into third at 99' 9".

Up until the hammers, Bruce Robb had been leading the competition, but he lost valuable points in the hammer events. In the caber, which was 21 ft. long and 145 lb., Robb reasserted himself with a toss of 2:30 to win the event, leaving both Brock and Aitken tied for second place with 85-degree attempts.

Now in the last event, the 56-lb. weight over the bar, this is where Robb needed the win if he stood any chance of taking the competition and going ahead of Brock. It was not to be as Brock nailed a winning throw of 15' 6", with Australia's Neighbour in second at 15' on countback, and Robb also at 15' for third.

Larry Brock said that he had a great time competing at Aboyne Games: "I was very happy with winning both the Aboyne and Glenffidich Championship Games, which is one in a series of Games leading to the great Royal Braemar Gathering, which is the final for the Glenffidich League."

"Now, I am looking forward to competing at the Bridge of Allan," Brock added, where he will be competing for the British Championships in the 56-lb. weight-for-distance and weight-over-the-bar titles.

Brock said, "I am feeling good at this point with my throwing; we will just have to see what happens on the day of competition for the British Championships events."