In the tradition of another heavy Odd Haugen-inspired strongman contest, the 2005 ASA-FitExpo Strongman Challenge won't disappoint anyone who thinks footraces are for track. 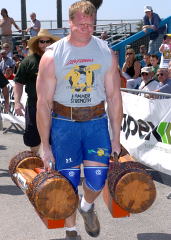 Phil Pfister pounds the pavement with a couple of heavy ones at the 2004 Battle of Muscle Beach (Venice, California). IronMind® | Randall J. Strossen, Ph.D. photo.

Here is the tentative list of six events, spread over two days. On Saturday, February 19, Odd is planning:

1. IronMind® Apollon's Axle™ for maximum weight
2. Giant Farmer's Walk with 400 pounds in each hand ("we will take it to another level")
3. A medley consisting of a 600-pound front carry (Zercher style), followed by the power stairs with a 500-pound implement very similar to what was used at the 2004 Battle of Muscle Beach.

Now that everyone is warmed up, the second day will see: