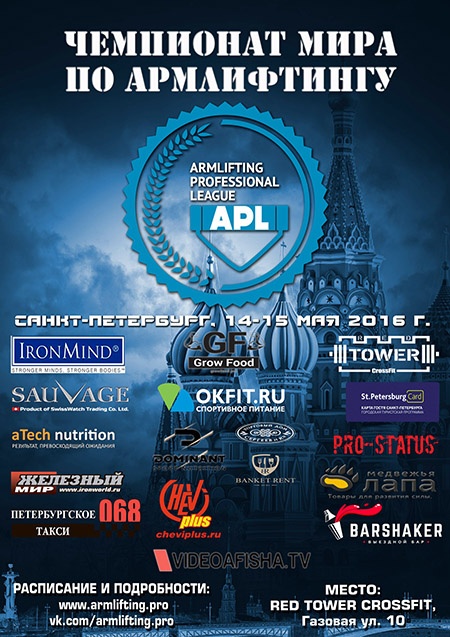 If you are a grip strength fan, competitor or coach, mark your calendar for May 13 -16, in St. Petersburg, Russia—host of the 2016 APL Armlifting World Championships. IronMind® | Image courtesy of APL

The upcoming 2016 Armlifting World Championships are on track to produce historical results, with multiple grip strength world records potentially in jeopardy when a crush of top competitors bring their best game to St. Petersburg, Russia in May.

Set in what has been called “the most beautiful city in Europe,” with the very real possibility of world record performances on the most venerated events in the grip strength world, the 2016 Armlifting World Championships appears destined to be one of the grip contests of the year.

Last year’s event had nearly 200 competitors, with multiple classes giving everyone who was interested a chance to compete, and speaking to the quality of the competition, the field included a number of men certified on the Captains of Crush No. 3 gripper, as well as a former men’s world record holder on the Captains of Crush (CoC) Silver Bullet Hold and the current men’s and women’s world record holder on the Rolling Thunder.

The Rolling Thunder has some magic to it: the longstanding and close IronMind–Odd Haugen collaboration began with the 2000 Rolling Thunder World Championships, staged as the kickoff event for Haugen’s Beauty and the Beast Strongman contest, and in 2010 the Rolling Thunder gave birth to a sport dubbed armlifting in Russia.

Dmitriy Suhovarov, a principal organizer of the upcoming world championships and a man expected to press for the world record on the CoC Silver Bullet, told IronMind, “This year will be even more spectacular than last year: we have more prizes, more competitors, entries from some of the world’s top grip-strength competitors, a much broader base of international athletes, plus we will have some strength world celebrities from disciplines in addition to grip.

“Last year, we set a new standard, and this year, we plan to break that record!” Suhovarov said.