The 2010 edition of the Eleiko Women’s Weightlifting Grand Prix has been announced by Konrad Hoegg, head of the organizing committee, who asked IronMind® for help communicating word of this competition throughout North, Central and South America, especially. 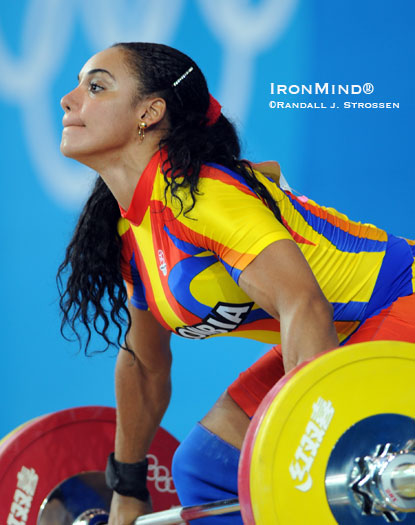 Columbian weightlifter Angelina Medina ripped this 100-kg, the first of three successful attempts she made in the snatch at the 2008 Olympics.  IronMind® | Randall J. Strossen photo.

Features such as both a women’s and girl’s category, team scoring and cash prizes are part of what sets the Eleiko Women’s Weightlifting Grand Prix apart.  The competition is scheduled for May 13 - 16 in Ohrdruf, Germany.  The preliminary entry deadline is March 14, 2010 and the final entry deadline is April 14, 2010.