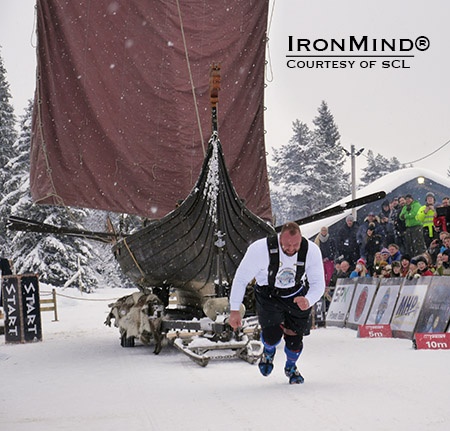 You have read about Hafthor’s Julius Bjornsson’s historic Monster Log carry at the 2015 SCL–Norway/World’s Strongest Viking contest; and now, here’s the rest of the story.

A thousand meters above sea level, 10 degrees below zero, snow and wind. That was what 12 athletes faced at Worlds Strongest Viking in Fefor, Norway. And did they face it? Well… let´s just say history was written.

Fefor Hoifjellshotel is a spectacular place, in the middle of beautiful Norway, and has been used as a hide-out for both kings and poets. There is a certain peace in the old timber walls, a feeling of calm, and you could see the athletes felt the calm when they entered the location. The arena was built in Viking style with dragon heads and bonfires.

First event was held late Friday night. A 27-kg sword was going to be held in front of the athlete for as long as possible, and of course, the one who held the sword for the longest time was the winner of the event.

The front hold is one of Ervin Katona’s best events, but this time he struggled. He ended up at 7th, and was not happy with that. It seemed like the guys with the biggest biceps and shoulders were the ones who lasted the longest. Several of the guys ended up on the plus side of 50 seconds, and the winner was – as last year – David Nyström, with 1.11.77.

A stay at Fefor means good food – plenty of good food – and the athletes really did know how to appreciate that. Both Moonen and Radzikowski told us that they never had had so much and such good food at any hotel.

The first event on Saturday was the Viking boat pull. The ship was placed on a sleigh and was to be pulled 25 meters as fast as possible. The ship itself wasn’t extremely heavy, but it sank into the snow, so it was hard to get it started. As soon as it was started, the guys ran with it. Hafthor ran the fastest, so the Viking ship just continued sailing by itself for several meters after he stopped.

Next event was 150 kg Viking press. Amongst the athletes there were several very good pressers, so big numbers were counted on. The one who really impressed here was Hafthor, as pressing hasn’t been his strongest side, and now he showed that training really improves an athlete. He won the event with 13 wonderful, strong reps.

Then there was what the Norwegians call ”mastebaering”, in English: carrying a log or yoke.  A 410-kg log was supposed to be put on the neck and shoulders, and it was to be carried as many meters as quickly as possible. Carrying a log like that is almost impossible, since it’s very hard to balance and keep balanced while walking. There were a couple of times when it looked like the athlete was going to lose his head because of the way the log rolled.  Radzikowski and Hafthor ended up at the same distance, 14 meters, and won the event.

After a 30 minutes break, were the guys had another good meal and got some warmth back in their bodies, a medley of farmer's walk (127 kg each hand) and loading of natural stones was next on the program. Two stones, weighing 105 and 155 kg, and two big logs were the objects, and they was supposed to be lifted up on a platform aproximately 130 cm high. With snow and ice on the stones this was a very difficult event, and the guys were complaining a lot about the ice.  Marius Lalas was the first athlete who got all the objects up on the platform, and Hafthor was the one who did it on the fastest time.

The last event of this spectacular day was the Hercules Hold. An amazingly cool Hercules Hold was built for the competition, 150 kg each hand, and once again, the one who held it for the longest time won.

The handles had been hanging in the cold, waiting, for 5 hours. They were cold, hard and ruthless. The Norwegian last-minute-entry Glenn Erik Iversen started the show with an impressive 42 seconds. For a couple of athletes one might think that it could be the winning time, but then the beasts came out. Ole Martin from Norway held on for 58 seconds which gave him a second place, and then the bar was set. A lot of good times came, and JF Caron won the event with the extreme minute mark just broken.

Six hours of grueling cold and hard events were over for 11 of the 12 men. Hafthor Bjørnson had still one goal in mind. The 1000 year historic record of the 610 kg yoke was up for breaking. The main mast of the viking ship ”Ormen Lange” weighet 610 kg and was carried three steps by the Icelandic Orm Storrulvsson in the year 1004.

The crew had prepared a 640-kg giant log for Hafthor, and the Icelandic giant entered the arena exactly 7 hours after his lifting started this day in January. The audience was still there, waiting by the bonfires. Hafthor prepared, roared, got under the giant log. The ground shook, Hafthor shook and the log got lifted off its resting podium. The mountain went five steps with it, and after that extreme feat, he fell down to the ground in pain, while the crowd applauded in awe.

I have seen many great feats of strengths since 2002, when I first started following the world's strongmen, but this is by far the most impressive moment.  In the cold, after a long and hard day, Hafthor Julius Bjørnsson did a feat so extreme that it will not be outdone in another thousand years.