Last year Mariusz Pudzianowski made strongman history by becoming the first person ever to win the World’s Strongest Man contest five times - a landmark achievement in strongman and one that could easily have served as Pudzianowski’s final and most glorious performance in strongman. 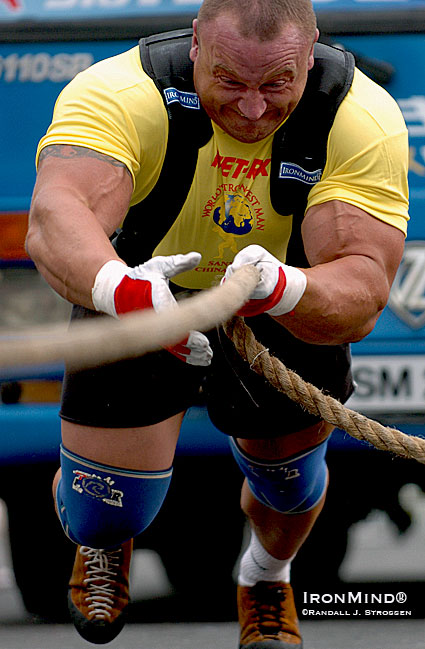 
Yet, the one-man strongman empire, easily the most recognized face in strongman and the man said to command the highest earnings in the field, hasn’t hung up his harness quite yet.

“Yes, I have very big motivation to compete in the 2009 WSM,” Mariusz Pudzianowski told IronMind® when asked about his drive level this year versus last year - especially since it was apparent to at least one person who bet on Pudzianowski to win the 2008 WSM title that the strongman superstar would die trying, if necessary, in his quest for the fifth World’s Strongest Man title.

“But I don’t want to make a new record (6th title) against my body,” he said. “I have my own record: it was 5-time WSM title and it suits me very well!  New WSM competition I will realize like it will be big new strongman game!  I like that style!” Pudzianowski said.

“Sixth or seven it means for me nothing,” Pudzianowski continued.  “I have had my dream now!  In 2008 it was the year for extremely huge motivation to win 5 time WSM.  In 2009 year it will be normal competition for me.”

That’s the psychological side of things, but what of the physical?  So IronMind® also asked Mariusz Pudzianowski - considering strength, fitness and injuries - how he would compare his state of preparation for WSM at this moment to where he was last year at this time.

“[Now] I have more power like the year before.  In 2008 I have more small injuries.  Now in that time I feel more powerful but what happens we will see,” he said philosophically.

The news about Mariusz Pudzianowski reportedly signing for an MMA fight generated a lot of interest and IronMind® asked him for the latest on this, starting with his background in martial arts.

“With training in [this] I have a lot of experience since my childhood, all of this was before strongman,” Pudzianowski said.

And as far as whether or not he’s likely to grace an octagon with his presence, Pudzianowski was adamant.

“Yes, it is true that I will fight in MMA because I like to fight,” he said, not that this means he is cutting his ties with strongman: “It is new challenge for me, but I will stay all the time with strongman and all that heavy stuff I like it very much,” Pudzianowski said.

And for anyone who still thinks Mariusz Pudzianowski has lost his taste for strongman competition and will either be a pushover or simply won’t show up for the 2009 World’s Strongest Man contest, heed his words: