IFSA Strongman makes no bones about claiming that its athletes are the top strongmen - responding to this perspective and some pointed IFSA comments, ace Polish strongman Jarek Dymek has a proposal that could settle the matter. 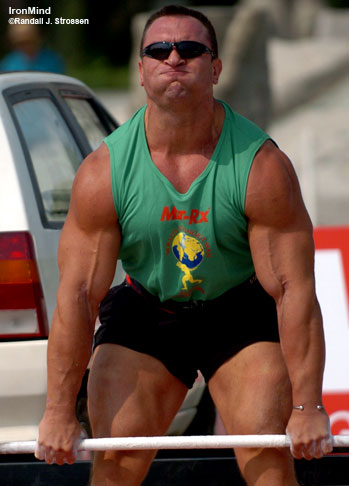 Jarek Dymek on the car deadlift at the 2006 MET-Rx World's Strongest Man contest. "We are not boys, but bulls," said the Polish strongman star. IronMind® | Randall J. Strossen, Ph.D. photo.

To date, the Arnold strongman contest has been the only common meeting ground for IFSA and non-IFSA strongmen, but because the Arnold is not a typical strongman contest - with its preference for events that are far less dynamic than usual - some would argue that it's not really a good test.

While the appearance of multiple strongman federations has created division and friction in the relatively small world of strongman, Dymek's proposal seems to carry merit not only in terms of casting more light on who can really do what, but it also seems capable of benefiting all who participate in such a contest . . . an interesting variation to the approach currently in place.

And lest Jarek Dymek fans think their man is purely a strongman strategist these days, rest assured that he is training hard with the hope of turning in some impressive performances in what he told IronMind® might be his last season as a competitor.