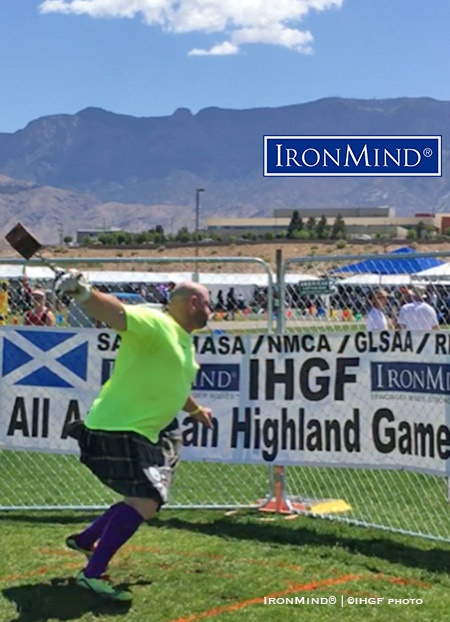 John Anthony won the A group at the Rio Grande Valley Highland Games, which qualified him for the IHGF All-American Highland Games Championships in September. IronMind® | ©IHGF photo

The 30th anniversary of the Rio Grande Valley Celtic Festival and HIghland Games proved to be the perfect setting for John Anthony to win the A group, which qualified him for the finals of the IHGF All-American Highland Games Championships to be held at the Great Plains Renaissance Festival and Highland Games in September.

The 2018 Rio Grande Valley Celtic Festival and Highland Games in Albuquerque, New Mexico, attracted more than six thousand spectators on its 30th anniversary, as it hosted the fourth leg of the IHGF All-American Highland Games Qualifying Series. Over 100 athletes from across the USA competed in the A, B and C, masters, lightweight, novice, and youth categories, with several field records and eight world records established.

The 16-lb. open stone was a dingdong battle between Burns, Dickens, and Anthony, with only inches separating them after the dust had settled. Burns took the win and a second field record with a putt 48’ 10”. Dickens followed with 48’ 4-3/4” with Anthony in third at 48’ 2-3/4”.

The 56-lb. weight over bar was won by Duer at a dominating height of 16’, also a new field record. Second place was a tie between Heaton and Sean Burns at 15’.

In the 20-lb. sheaf toss, Anthony and Burns both cleared the monster height of 32’, a new field record, with the win going to Anthony on countback. Third place was Duer at 30’.

The IHGF would like to thank athletic director Chad Thompson, along with Grant Oliver, assistant director, and Laura Thompson and Mona Melic for all their hard work in keeping things flowing during the weekend; and all the judges and the RMSA for looking after all the athletes so well, with a very nice lunch on the field.

John Anthony, of Colorado, has been added to the qualifying list, along with athletes including Kyle Lillie, Andrew Heaton, and Anthony Clinker, and will go forward to the finals of the IHGF All-American Highland Games Championships, to be held at the Great Plains Renaissance Festival and Highland Games in September.

The next qualifying games on the circuit will be this coming weekend at the Scottish Fest USA  Costa Mesa Highland Games, the fifth leg of the IHGF All-American Highland Games Qualifying Series.