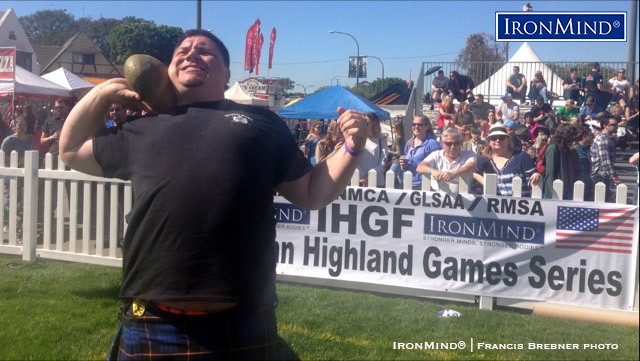 Kyle Lille turned in an impressive performance for a commanding win at the Queen Mary Highland Games.


The Queen Mary Highland Games, held in Long Beach, California, attracted more than 8,000 spectators over its weekend of Scottish festivities while celebrating its 25th year of consecutive Highland games with more than 100 athletes competing over two days. Kyle Lillie, of Phoenix, Arizona, took top honors in his division with almost a clean sweep and a few personal bests. Lillie, standing 6’ 4” and 325 lb., is a very impressive athlete and a rising star in Highland games.

In the 16-lb. open stone, Lillie again unleased a series of class throws with his best at 52’ 7” for back-to-back victories in the stones. Despite a severe rib injury sustained in training, Randolph gave his all with a putt of 51’ 1/2"  for second place, with Brown in third at 45’ 1-1/2”.

In the 56-lb. weight over bar, Lillie showcased excellent form, clearing the bar at 16’ for the win. Brown did 15’ and Baltren was third on countback at 13’.

The 20-lb. sheaf over the bar saw three athletes clearing 25’, with the victory going to Staggs on countback with fewer misses. Second place was Brown and third, Lillie.

Only two athletes successfully tossed the 17’ 4”, 125-lb. caber: Brown and Lillie each produced 12 o’clock tosses, but on countback Brown had a better 12:05, giving him the victory. Third was Baltren at 60 degrees.