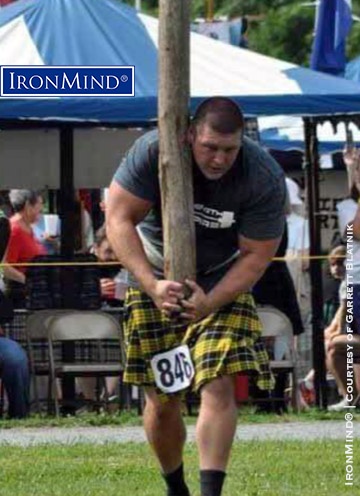 Garrett Blatnik on the caber at the 2018 Dublin (Ohio) Irish Festival, where he won the Highland Games competition. IronMind® | Photo courtesy of Garrett Blatnik

The king-size Dublin (Ohio) Irish Festival crowned Garrett Blatnik the overall winner of the eighth leg of the IHGF All-American Highland Games series, and the final qualifying round in the IHGF All-American Stones of Strength Championships was won by Ken McClelland and Joshua Eisele (tie).

The Dublin, Ohio Irish Festival is now the largest festival in the world and still rapidly growing. The festival celebrated its 31st year with more than 200,000 spectators over the three days of Celtic festivities, on 7 stages, with 65 acts and over 500 performers covering 38 acres in Coffman Park.

The athletic director for the Dublin Irish Festival, Robert McKeeman, and his crew did an exceptional job of running the events and making the eighth leg of the IHGF All-American Highland Games series and the IHGF All-American Stones of Strength Championships a huge success, with everything running like clockwork.

The lineup in the A group included Kendall Thomas, Eli Kiener, Brad Sauer, Max Mays, Daniel Turner, Jeffrey Beatty, Garrett Blatnik, and Nick Rosendaul. Kiener claimed the first win with the 22-lb. Braemar stone with a putt of 38’ 11”, followed closely by Blatnik at 37’ 5-1/2”, with Sauer third at 36’ 9-1/2”.

Kendall kept up his winning streak in the 28-lb. weight for distance with a series of throws all over 75’, his best being 78’ 11” for another win. Second was back and forth between Blatnik and Sauer, with Blatnik marginally going ahead with 74’ 7-1/2”, leaving Sauer in third at 74’ 3”.

The caber was 19’ 8” in length and 110 lb., and the caber toss ended in a tie between Kendall, Blatnik, Sauer and Beatty, who all produced 12 o’clock tosses.

In the 56-lb. weight over bar, Blatnik took things to a new level, clearing an incredible 17’. Second was a tie between Turner and Sauer at 15’.

In the final event, the 16-lb. sheaf, Blatnik again soared with 38’ for the win; second was a tie between Kendall and Turner at 30’.

The concluding qualifying round in the IHGF All-American Stones of Strength Championships also took place in at the Dublin Irish Festival. This strength event was the first of its kind to be contested at the gathering and was well-received by the spectators. The competitive lineup of athletes included Ryan Putzulu, Dusty Davis, Joshua Eisele, Ken McClelland, Boston Jacobs, Shawn Brooks, Matt Garee, and Kasey Jackson who slugged it out over five stonelifting challenges.

In the 50-lb. stone putt, Jackson took the early lead but was surpassed by Eisele and McClelland, with Eisele coming out on top with a best of 18’ 7”. McClelland was second with 18’ and Jackson third at 17’ 6”.

The 330-lb. Husafell stone carry was epic as the lighter guys in the group set some very fast times. Putzulu set a benchmark at 150’, which was 60’ more than what he did in last year’s qualifier and shows just how hard he had trained for this competition. Jacobs, at only 230 lb. bodyweight, marginally took the lead with 151’ 3”. McClelland set off with a look of determination to set a new lead at 202’ 7”; and Eisele, another of the lighter contenders at only 230 lb., took off like a sprinter and clocked up 207’ for his second victory.

In the Manhood stone, athletes lifted a stone weighing 200 lb. onto their chest and then pressed it overhead for reps within 75 sec. McClelland put up a star performance to win with 7 reps, followed by Putzulu with 5 reps. Third was a tie between Davis, Eisele, Jacobs and Brooks with 3 reps each.

In the Stone Medley, athletes carried a series of natural stones ranging in weight from 193 lb. to 247 lb. over a 15-m course in 75 sec.  Only three athletes completed the course with all four stones. Jacobs went all out and set the time to beat at 53 sec. Eisele bettered this time, completing all four stones in 42.71 sec. McClelland, at a body of 350 lb., gave his all in a lung-busting performance of 45.02 sec., for second.

In the final event, the Atlas stones, ranging from 200, 250, 300, and 350, to 400 lb., athletes had 60 sec. to load all five stones onto barrels. Putzulu completed 4 stones in 18.27 sec., which was surpassed by Jacobs with 4 stones in 15.12 sec., for third place. Eisele looked focused and got off to a great pace but hit a wall with the fifth stone and had to settle for second place with 4 stones in a time of 13.3 sec. McClelland set off like a caged animal, ripping through all 5 stones in a record time of 21.45 sec. After the points were tallied, Eisele and McClelland tied for the win and split the $1,000 prize.

The top five athletes, Eisele, McClelland, Jacobs, Putzulu, and Garee, have qualified for the finals of the IHGF All-American Stones of Strength Championships set for 13–14 October in San Clemente, California; the winner will then compete in Fefor, Norway in 2019 in the IHGF Stones of Strength World Challenge. 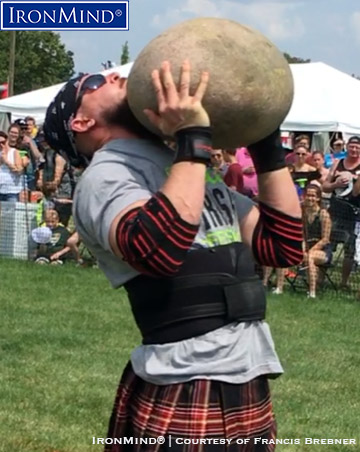 Joshua Eisele (above) and Ken McClelland (below) tied on the final qualifying round in the IHGF All-American Stones of Strength Championships, and both men qualified for the finals in October, in San Clemente, California. IronMind® | Photos courtesy of Francis Brebner. 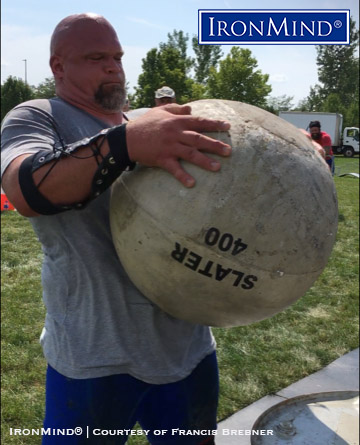