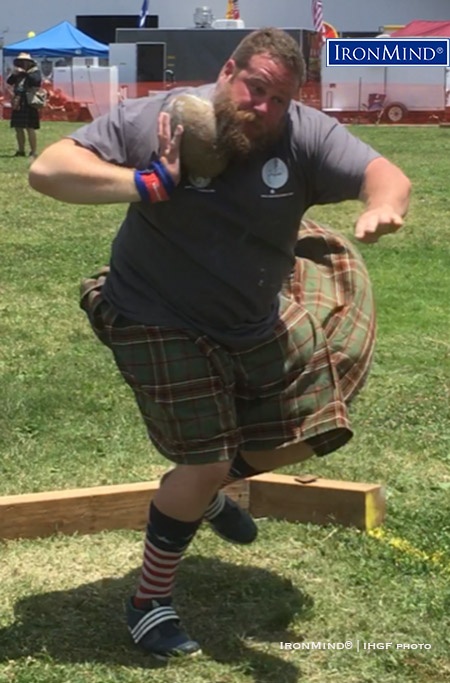 The action was hot and heavy at the Costa Mesa Highland Games and world record holder Spencer Tyler proved himself to be the top dog in the men’s pro class. IronMind® | IHGF photo

Dunbar took it up a gear in the 22-lb. hammer, blasting out 107’ 9” for the win. Second was Lillie 101’ 7-1/2” and third Randolph at 97’.
Only two athletes turned the 17’ 4” long and 125-lb. caber, with the win going to Randolph’s 12:05. Lillie did 11:30 and Whittington 85 degrees.
A highlight was the 56-lb. weight over bar, which started at 12’ and all athletes still in at 14’. Five athletes cleared 15’, and at 16’ only Dunbar and Lillie prevailed, moving to 17’, which they both cleared. At 18’ the atmosphere was electric as Dunbar cleared the height, throwing down the gauntlet to Lillie, who narrowly missed. The bar was raised 1" above the world record height, to 18’ 3”, and cheered on by the crowd, Dunbar lobbed the weight over the bar. Some of the first to congratulate Dunbar on his impressive throw were pro athletes Andy Vincent and Spencer Tyler. Dunbar then asked for 18’ 6” but missed on clearing. Sadly, as reported the next morning, the weight turned out to be underweight, but we predict it is just a matter of time before big Colin will be successful with his record throw.
The final event with the 20-lb. sheaf toss was a win for Burns at 31’, with Whittington and Randolph tying at 28’.

Doug Mostyn, president of the SAAA, and athletic director Joe White were delighted with the weekend of Highland athletics and pleased to see the many athletes competing.

Special mention is given to Jarvina Routt, who set a world record in the woman’s lightweight class in the light weight for distance at 72’ 8”.

Lillie and Randolph are both looking to turn pro within the next few months. The next in the IHGF All-American Highland Games qualifying series will be at the Pikes Peak Celtic Festival in Colorado, 15-16 June.

The 20-lb. sheaf was a three-way tie at 30’, with the win going to I. Burchett on countback, with Tyler second and Vincent third. As an note, Tyler had a throw outside of competition that cleared the bar at 36’ 7”.

The opening height for the 56-lb. weight over bar was 14’, and at 17” only Tyler and Vincent succeeded. They each cleared 18’ and the bar was raised to 18’ 6”, which stymied them both, leaving Vincent in first on countback. Tyler was second, and Brown and I. Burchett tied for third at 16’.