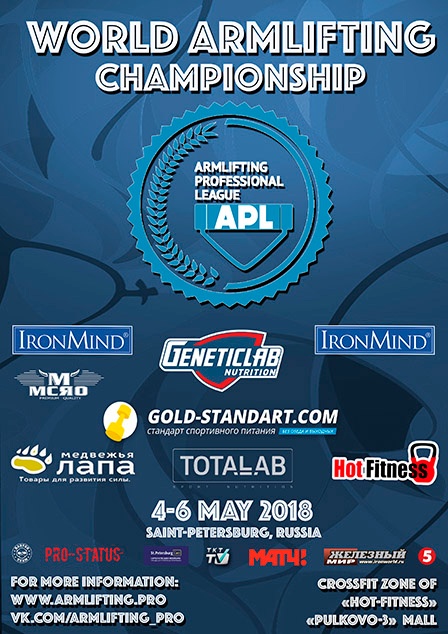 The APL has nurtured armlifting to its present status as the 2018 APL Armlifting World Championships prepares to welcome grip-strength competitors from more than 20 countries. IronMind® | Courtesy of APL

Armlifting began as a single-event grip strength competition, using IronMind’s Rolling Thunder—a longstanding international benchmark for a thick-handled, one-hand deadlift—and has since expanded to include such other core grip-strength events as the CoC (Captains of Crush gripper) Silver Bullet Hold, the IronMind Hub and the Apollon’s Axle double overhand deadlift.

Under the leadership of Sergey Badyuk and Dmitriy Suhovarov, APL Armlifting has expanded enormously—drawing an international field of competitors, holding contests across Europe, upgrading the sport by following applicable guidelines used in Olympic sports such as weightlifting, and increasing its ties with competitors, coaches, organizers and sponsors.

“In this year we have taken a big step forward: those who came alone in previous years, now will come with teams,” Suhovarov told IronMind. “For example, we have a good U.S team, a very big team from Finland (10 athletes + 3 coaches), as well as from Belorussia and from Ukraine (more 10 people).  In total, we have more than 20 countries now.

“In this way we finally developed this sport with a format where the World Championship we have a really a contest not only of individual athletes, but also of countries and teams. I very much hope that this dynamic will continue.

“About our competition preparation: We are in the final steps as our medals are in the factory; in Saint Petersburg, we have begun advertising (posters, billboards, etc.), and we are working at  increasing the exposure [for this competition].

“ We hope all athletes and spectators will enjoy our contest!,” said Suhovarov.