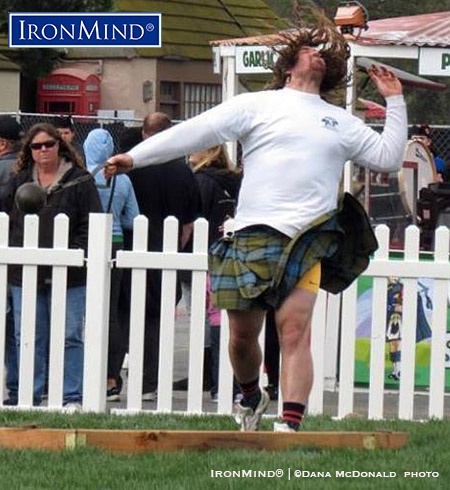 Colin Dunbar, shown on the light weight for distance, dominated the Amateur A field at the Queen Mary Highland Games and looks to have a bright future as a Highland Games pro. IronMind® | ©Dana McDonald photo

The 2017 California Highland Games season open with Queen Mary Highland Games and this also proved to be a coming out party for new heavy talent, Colin Dunbar.

The Queen Mary Highland Games, held in Long Beach, Southern California, signals the start of the Highland Games season in California. Despite a wet start to the first day’s competition, more than 8,000 spectators came through the gates over the weekend and were entertained by the largest number of athletes—an impressive 111 in all—assembled at these games to date.

In the Amateur A division, new heavy Colin Dunbar, of Long Beach, California, known as the American Highlander because of his long hair and impressive stature and who stands at a towering 6’ 8” at 320 lb., prevailed. At 28 years old, Colin, who comes from a track and field background, competed twice at the Olympic Trials in the wire hammer (2012 and 2014), and in 2016 he won the 35-lb. weight throw at the USATF Indoor Championships, with a distance 23.98 m (78’-7.5”). Dunbar made a huge impression on everyone, myself included, as I had never before seen someone with only four practice sessions make such an impact in his first Highland games and produce a good all-round performance, with marks that could hold up to most pro athletes.

In the 56-lb. weight over bar, Dunbar showed overall strength and explosive power, owning the event with a height of 16”, and on extra attempts coming close to clearing 17’. Baltren, Gurke, and Stamps cleared 14’.

The final event, tossing the caber, which was 14’ 6” and 110 lb., ended in a tie between Bryan Staggs and Stamps, who both nailed 12 o’clock tosses; third-place Jason Spraggins also did a 12 o’clock toss—and just to mention Dunbar, he tried the caber for the first time in competition and pulled a toss of 11:55.

Dunbar liked his first games: “What an atmosphere! I had such a great time.” SAAA president Doug Mostyn was delighted with the overall games and happy to see the largest number of entrants to date, including 24 novice athletes.