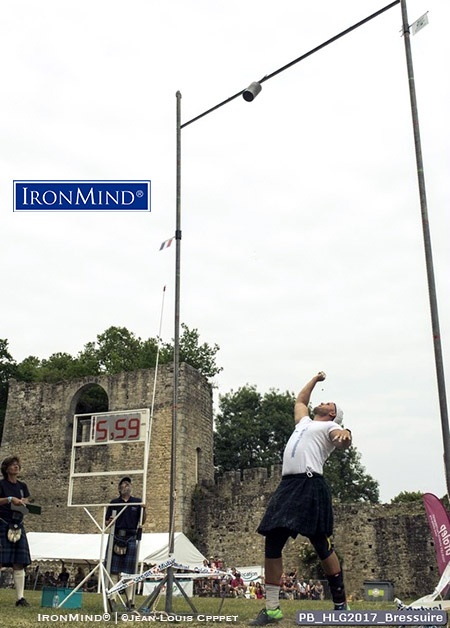 “Vlad Tulacek broke three ground records and he even had an attempt at 5.59 at the WOB. He is the best European thrower and he is only 28,” Jean-Louis Coppet told IronMind. IronMind® | ©Jean-Louis Coppet

Bressuire, France hosted of the 2017 IHGF European Highland Games Championships, under the able direction of Jean Louis Coppet, president of L’Association des Jeux d’Ecosse en France (AJEF), and an amazing Highland Games committee. The perfect weather with blue skies and glorious sunshine, and the setting on the grounds of the Château de Bressuire, a ruined castle which dates back nearly 1,000 years, made a truly magical atmosphere.

The caber, 19’ 6” and 129-lb., was by no means easy as only three athletes managed to conquer this mighty stick. Fans roared as Tulacek triumphantly nailed 12:00. Wenta’s second-place toss was 11:15, and Kobylarz took third with 2:00.

After day one, Tulacek led at 6 points, with Colthart and Wenta on 10.

The 56-lb. weight over bar was a high point of the competition, with a ground record at 16’ 7” set by McKim in 2015. With Tulacek as the only athlete who cleared 16’, the bar was raised to the new field record height of 16’ 9’, which he cleared on his first attempt, thrilling the spectators.

The Bouchain Bouvet-Ladubay 28-lb. cork putt, a challenge event, was won by Tulacek with a distance of 33’ 10”.